Rebecca Rolfe: How Pocahontas Got Her New Identity 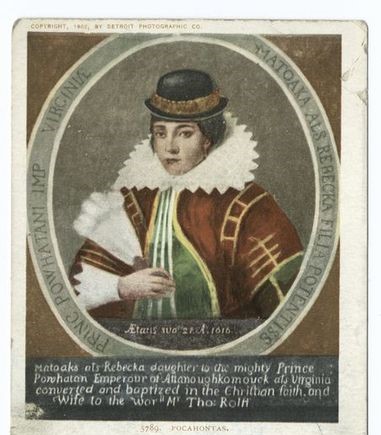 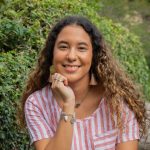 We all know Pocahontas as the Disney princess who fell in love with John Smith and lived happily ever after. However, her actual story is nothing like the Disney movie.

The first we hear of the historical Pocahontas was in 1607, when John Smith, the English explorer who was a part of the Jamestown settlement, raided the Powhatan Confederation territory in search of food and material goods. Smith was attacked by Chief Powhatan’s brother, Opechancanough, for violating their land.1 The tribe held a huge ceremony for his execution, but after feasting during the ceremony, Smith was saved by Pocahontas before he could be killed. Pocahontas laid her head on top of Smith’s as a protest against his death, and the warriors backed down and spared Smith’s life. Smith later wrote in the journal he kept during his exploration of Jamestown that he owed his life to the young twelve-year-old girl who saved him.2

Saving John Smith was the first encounter Pocahontas had with the new white settlers. She did not view the settlers as a threat, and she frequently visited Jamestown throughout the next year and a half. Pocahontas had a particular interest in Smith and developed a friendship with him. They taught each other their language and learned about their two different cultures. Pocahontas helped the settlers trade with other Indians who were in the confederation, and she advised Smith which tribes to avoid; and she helped the English negotiate for food. The settlers enjoyed her youthful presence by her entertaining the men by turning cartwheels in the settlement. Pocahontas went on to save some of the settlers’ lives. She participated in negotiations for the release of native prisoners held by the English, and she helped an English messenger boy, Richard Wiffin, escape when her father, Chief Powhatan, ordered him to be killed. In December of 1608, while John Smith and several of his men were in Powhatan’s village negotiating for corn, Pocahontas warned them of a plot to kill them. Pocahontas strove for peace and unity between the two communities, but her tribe did not seem to agree with her. Many natives viewed Jamestown as a threat. They had no interest in having a relationship with the settlers but for Pocahontas.3 Pocahontas felt as if it was her responsibility to nurture the relationship between her people and the newcomers; however, this came to an end in 1609 when Smith and his men were involved in a hostile exchange with an intimidating group of warriors that intended on disarming the Englishmen and inflicting harm upon them. Smith was severely injured and was left no other option but to return to England to recover.4

After Smith’s return to England, Pocahontas was married to a Potomac warrior, Kocoum, and focused all her attention on her new relationship. The Potomac was one of the most distant Powhatan tributary subjects. Her marriage with a Potomac warrior was designed to create an alliance between the two tribes. By 1610, Pocahontas had gone to live with the Potomac tribe far away from the Jamestown settlement.5 Due to Pocahontas’s absence in the Powhatan confederation far from Jamestown, the relationship between the two communities rapidly declined. Smith’s absence also played a role in the downfall of the relationship between the Englishmen and Native Americans. The region became very hostile and replaced the peaceful environment that had previously been created by Pocahontas. During the ensuing period of renewed violence, Pocahontas had little to no contact with the settlers and did not visit Jamestown for another four years.6

In September of 1612, Captain Samuel Argall, English explorer and sea captain, traveled to Virginia to help the Jamestown settlement acquire food and goods from the Native Americans. Later in 1613, Argall took his large, well-armed ship, the Treasurer, and sailed further north in the Chesapeake Bay and stumbled across the Potomac tribe. Far from the control of the Powhatan, Argall decided to enter the Potomac River and found the tribe eager to trade with him. Argall was originally in search of corn, but instead found something worth more than a thousand bushels of corn. Argall had received word that the Powhatan princess was in his vicinity, making this the first time in three years that the name Pocahontas had been heard by the Englishmen. They were ecstatic to learn that Pocahontas, now a seventeen-year-old married woman, was alive and healthy. However, Argall had plans for her and wanted her in order to ransom her against her father. Chief Powhatan had taken multiple Englishmen as hostages and Argall wanted his men back. Instead of inflicting warfare among these two communities, Argall decided that kidnapping Pocahontas was a more efficient way of getting his men back to Jamestown safely. Argall and his men traveled to the Potomac town of Passapatanzy, where Pocahontas was living, and they negotiated her capture with the Potomac. Argall conspired with the Potomac commander, Iopassus, and his wife to trap Pocahontas by spreading the word that an English ship from Jamestown was moored in the area. Pocahontas, being immediately curious, wanted to see the ship for herself. Iopassus his wife and Pocahontas walked together to see the ship. Iopassus’s wife was instructed by her husband and Argall to beg to enter the ship, and Iopassus then asked Pocahontas to accompany his wife. While being toured around the ship by Argall’s men, the three visitors were asked to stay the night on the ship. Pocahontas could sense something was going on, but she accepted anyway and stayed. The next morning Iopassus and his wife were sent ashore by Argall, but he did not let Pocahontas leave. On April 13, 1613, Pocahontas was officially under Argall’s control.7

Argall sent a messenger to notify Chief Powhatan that he wanted eight men and all their stolen weapons in exchange for the Princess. Due to Pocahontas’s status in the Powhatan confederation, she was treated like royalty and shown the utmost respect from all the Englishmen. Argall believed that capturing Pocahontas was the best way to resolve all English and Native American conflicts, but his plan failed. Chief Powhatan responded to Argall’s ransom by releasing a few English hostages and giving a small amount of corn. Her father believed the Englishmen had no intention of harming Pocahontas and did not take Argall’s threat with much concern. The Deputy Governor of Jamestown, Thomas Dale, was offended and ordered Argall to keep Pocahontas until her father met their demands. Pocahontas then remained with the English and was under the care of Reverend Alexander Whitaker and tobacco planter John Rolfe. Pocahontas quickly accepted her new situation and became accustomed to the changes in her life. Pocahontas was given English-style clothing that the English women wore in Jamestown, she ate English-style cooked meals, and most importantly she learn about the English religion, Christianity. By 1614, having been abandoned by her father as he refused to release more men and return the stolen weapons, Pocahontas was accepted by the Jamestown community, and they taught her how to be one of them. Reverend Whitaker and Rolfe taught Pocahontas the Lord’s Prayer, the Ten Commandments, and the rituals of the Church of England. After several months of teaching Pocahontas, she accepted the Christian faith and was baptized by Reverend Whitaker into the Anglican Church, renaming her Rebecca.8 Now that Pocahontas was no longer a member of her tribe, and now a part of Governor Dale’s community, Chief Powhatan wrote to Governor Dale and promised to return their men, the stolen weapons, and corn. He did this because he viewed Pocahontas’ new status as being part of Governor Dale’s “family” and she was now his “child.” Chief Powhatan expressed that he and Dale were now “ever friends” because they shared a daughter. This restored the peace between the two communities, and Pocahontas was once again the root of a peaceful relationship between the English and her people. However, it is speculated that this may have been Pocahontas’s intentions all along, and her baptism was a message to her father.9

Fitting comfortably into her new life as Rebecca, she developed a love interest. While helping instruct Pocahontas about the Christian faith, John Rolfe had fallen in love with the princess and desired her hand in marriage. The two had a mutual liking that developed over the months of her capture. Pocahontas fell in love because of his gentleness and sympathy. Pocahontas saw “Jesus” in him and agreed to marry him. Rolfe knew that Dale might not approve of this marriage and instead presented the marriage as an opportunity to fulfill King James I’s wishes for converting the people they encounter on the new land they had discovered. The marriage was accepted by Dale, however, but Rolfe still needed permission from Chief Powhatan. Powhatan agreed to the marriage, and the two solidified their love for each other on April 5, 1614, in Jamestown. Now on her second marriage at eighteen years old, she was known as Rebecca Rolfe. Her marriage secured years of peace between the English and the Powhatan. By Pocahontas converting to Christianity and marrying an Englishman, she was abandoning her tribe and her culture. Her decision eased the relationship between the Indians and the English because her tribe respected her choice to embrace Christianity. Pocahontas sacrificed everything she knew to act in the interests of peace between her people and the English.10

Pocahontas and Rolfe’s marriage was very successful and they went on to have a son together, Thomas Rolfe, in 1615. The story about Pocahontas became very popular in London and she became a celebrity known as Lady Rebecca Rolfe. It was all the rage that a native princess would marry an Englishman. Pocahontas was the perfect advertisement for the Virginia Company to use to promote living in Jamestown to those who were hesitant to leave England. In June 1616, Rolfe and Dale took Pocahontas, their son, and about a dozen more Powhatan natives to visit London. They actually sailed in the same ship in which she had been kidnapped a few years prior. Over the next nine months in London, the Virginia Company frequently kept Pocahontas in the public eye. She made several appearances at the palace of James I, attend galas, and sat for an engraved portrait of herself in which she was dressed in a beaver hat, a cloth coat, a lace collar, and pearl earrings, and she is holding a three-plumed fan. However, the most special part of visiting England for Pocahontas was her reunion with John Smith. She had not seen Smith since 1609, and was told he had died due to his injuries. He had played a special role in her life as a young girl, and now he got to meet her again, as Lady Rebecca Rolfe.11

Come 1617, it was time for Pocahontas and her family to return to Jamestown. However, on the way back Pocahontas became ill, most likely of a lung ailment, and she developed a fever.12 Sometime in March 1617, she was taken ashore at Gravesend to recover, but Pocahontas died and was buried in the parish church there.13 Pocahontas wanted to live a life with purpose, and that purpose was to bring peace within her community. She lived up to that purpose until her very last day on this earth.

My name is Maria Luevano, and I was born and raised in San Antonio, Texas. I love to spend time with my family, give my pets some love, and watch my favorite shows and movies! I am an Interdisciplinary English Language Art and Reading major at St. Marys University in San Antonio, Class of 2024. I plan to become an elementary teacher because it is my passion to help others learn and fulfill their potential!