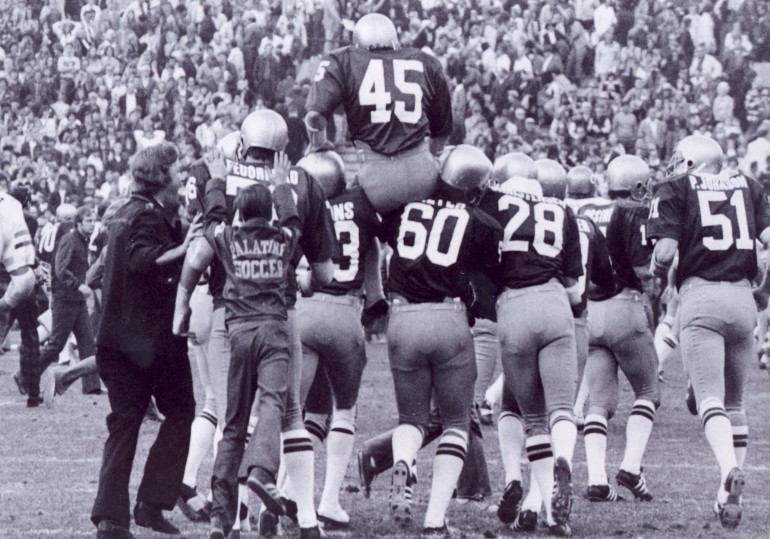 It was a cold, fall Indiana day on November 8, 1975. The smell of grilled hot dogs and popcorn were in the air just as they typically were during football season. Children played in the streets dreaming that one day they could be playing on that field. The roar of the stadium erupted into a wave of the Notre Dame fight song as they scored their last touchdown for the night. The score was 24-3 and Notre Dame had just defeated Georgia Tech in their last game of the season.1 Rudy Ruettiger hadn’t played in a game during all four years of his career playing football for Notre Dame. Getting in the game was something he always wanted to do, but he knew he would probably never be able to. Yet for four years, this never stopped a 5 foot 7 inches tall, 165-pound guy from putting everything he had into the sport. Being this small and playing division one football is equivalent to signing up to die, at least for any logically thinking person. Rudy was not a regular thinker. For Rudy, football wasn’t just a game or a sport. It was his passion, his desire, and his dream. His dream from his youth was to play football at Notre Dame. Everyone he knew, including his parents and his thirteen other siblings, made fun of him for this. Rudy was never a very naturally athletic kid, nor was he gifted in size or strength. But he had more heart for it than anyone else in the world. He would play backyard football with his older brothers, and would always lose because of his size. He would still always say he was going to play football for Notre Dame. His brothers would laugh and make fun of him, never taking him seriously.2 Little did he know that he would be in a very similar situation five years down the road. Rudy would never let anything, or anyone take his dream away from him.

Rudy had several challenges he had to deal with in order to make his dream come true, and a big one was getting the grades in school. Rudy had dyslexia, which is a mental illness that affects someone’s ability to read, write, and listen. This made it extremely difficult for him to concentrate, and his time in school was miserable. In high school, he played for Joliet Catholic High School. Football was the one thing he loved during school. He graduated with a 1.77 GPA, less than a C average.3 He wanted to be a part of Notre Dame, but didn’t know how to get there, especially with his terrible grades. After high school, he served in the Navy for two years. And after the Navy, he worked in a power plant for two years. While working one day at the power plant, there was a malfunction in the pressure system that started a fire and killed his best friend. He realized that life is too short to wait for things to happen. Even though this was tragic for Rudy, it was what motivated him to start taking concrete steps to pursue his dream.4

When he applied to Notre Dame for the first time, he was denied because he didn’t have the grades. He knew he needed to get the grades to be accepted into Notre Dame, so he did the next best thing. He was accepted at a school called Holy Cross, which was right next to Notre Dame. His family had no money to give him for college, but his tuition was covered through the GI bill from serving in the Navy. During his time at Holy Cross, he actually spent so much time on Notre Dame’s campus that he was invited to be a part of the student body there, as well as the boxing club. He also continued to write letters of application to Notre Dame. The total amounted to fifty letters, and all were denied.5 It was an extremely hard time for him, but he got connected to the right resources and special tutoring for his dyslexia, so that he maintained a B average—and was finally accepted to Notre Dame.6 That same year with his persistence, he earned a spot on Notre Dame’s football scout team, which was a practice squad that helped prepare the starters for their games.7 The coach and players respected him because they had to. He was the most determined player they had ever seen. He was volunteering to be the lowest position someone can be in college football. Worse, he had little shot of ever being able to dress and go to the games with the team since there wasn’t enough equipment and jerseys for the scout players. Not many people would continue being a part of a team if that’s all they were used to doing. But he was clearly willing to do whatever it took, even if it was being used as a practice player. And Rudy was just getting started. This was the first time he had proven all his friends and family wrong by proving that he could achieve his dream. He had finally done it, but it wasn’t complete yet.

Rudy continued to put everything he had into football, but the fact was, he didn’t have the size and was also not talented enough to be able to play in division one football games. Even still, he was a huge influence on the players and coaches as well. Rudy had the most drive and passion to be there out of all the other players. He deserved more than he had, and he just kept running with it without any attitude. Ara Parseghian was Rudy’s coach during the last season of his career. He was very impressed by Rudy’s hard work all season, so he decided to reward him. During their last game of the season Rudy was able to dress and run with the team out of the tunnel. He was having the time of his life being able to be on the field, dressed and cheering on his team; but for some of his teammates, this wasn’t enough. The game was against the infamous Georgia Tech, who were no easy opponents. Their quarterback, Danny Myers, was ranked in the top ten quarterbacks in the country. Notre Dame was winning 24-3. It was the last 27 seconds of the game and some of Rudy’s teammates started chanting his name. “Ru-dy, Ru-dy, Ru-dy!” Then the crowd started chanting his name and coach Parseghian, being impressed by Rudy’s resilience all season, gave him a shot. He came over to Rudy and all he said was “Ruettiger, your in!”8 With a rush of adrenaline down his spine, he could barely breathe. He sprinted on the field and prepared for the moment he’d been waiting for his whole life.

There was only a total of three plays Rudy was able to play in. During the last play, the Georgia Tech quarterback hiked the ball, but was immediately met by Rudy. Rudy had only played for 27 seconds, but recorded a sack against one of the best quarterbacks in the country at that time. Right after the play the clock read zero and Notre Dame had won.9 Rudy was carried off the field as the crowd was still chanting his name. Rudy had achieved his dream. He had overcome his obstacles and played football for Notre Dame. This is why he was carried off the field. Not for his athletic ability, or even for getting that sack. It was because he made such an impact on his team and on the community of Notre Dame with his story. He deserved that moment and that one moment was worth all of it for Rudy. He was the first person in the history of Notre Dame football to be carried off the field, and there was only one more after him. This was the peak of Rudy’s football career, and would later make him an icon in football; but his struggles weren’t over yet.

Now that the football season was over, he had fulfilled his dream. Everything he had worked for was now complete. And then he fell into a state of drifting, going from job to job just managing to make ends meet. He worked selling insurance. He started a janitor service, as well as working in finance in an office. He never enjoyed any of them. During this time, he met and married Joyce Tucker in 1983. They lived happily for two years, but then started having difficulties and were then divorced in 1986. It was after this that he came up with the idea of making a movie about his story to share with the world. He moved back to South Bend, and there, through an old friend he got connected to Angelo Pizzo, who was a famous director known for directing the movie Hoosiers, which had won film awards. Angelo initially rejected Ruettiger’s offer because he didn’t think there was a good enough story to it, and he didn’t like Notre Dame in general. Soon though, Pizzo accepted Rudy’s offer after his nagging and persistence. The movie was very well made and a very accurate portrayal of his real life.10 Rudy has since become a motivational speaker, sharing his story with the world, so that others can be motivated by it.

Rudy Ruettiger was a man of incredible perseverance and really made the most of what he had. He overcame his obstacles by not listening to the negative advice people gave him; instead, he focused on one thing: his end goal. He said later in interviews that it wasn’t his pre-football life that was the low point in his life. It was after football finished where he had the most struggle. He didn’t have a goal, but eventually achieved one. He then dedicated his life to sharing his story so that others could learn and be motivated from it as well. In his award-winning film Rudy, Sean Ashtin portrays his life very accurately. He gives a great deal of respect to the hardships he faced and his perseverance through it all. There are some people who didn’t support the movie because he so willingly sold it to Hollywood and became famous, but he didn’t make the movie to become famous. He made it to inspire others. Rudy later stated that those who viewed his story and movie with criticism were the ones that simply “didn’t have a dream.”11 They didn’t understand his story because they couldn’t relate to it. It’s these types of people Rudy had to avoid in order to make his dream come true. There was no room for negativity when he pursued his dreams.