Sic Semper Tyrannis: The Conspirators of America’s First Assassination (Part II: On the Run and Trials) 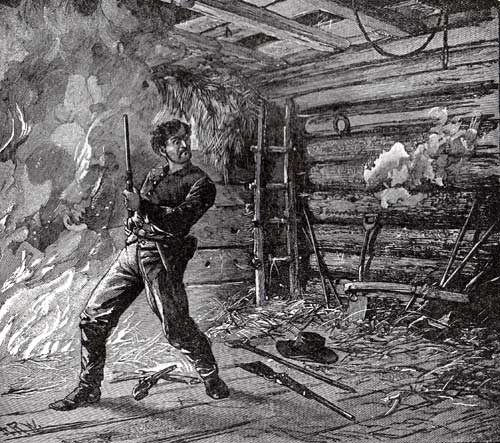 After the deadly acts were committed, John Wilkes Booth spurred his horse, and rode furiously into the night. His intentions were to meet up with with David Herold and head towards the Southern sympathizers in Virginia. As Booth rode in the night, Lewis Powell panicked and could not find a way to escape from Washington. Instead of trying to make his way out, Powell stayed in the city and rode around, lost in the labyrinth that were the streets of Washington, D.C.1 Booth met up with Herold and made his way to the Surratt Tavern. The two men hopped off their horses and entered the tavern, and it was here that they gathered a carbine rifle and some ammunition, and began to plan their next move.2 Booth, still hurt from his fall onto the stage, persuaded Herold to take a slight detour to visit a doctor to fix his leg.

Booth and Herold rode their horses for about four hours from the Surratt Tavern towards the house of Dr. Samuel Mudd. The pair reached the house at around four in the morning, and woke up Dr. Mudd.2 By that time, the news of the assassination had not yet reached Dr. Mudd, so he bought the story that Booth told him, quickly splinted his leg, and offered to house the two for a couple of hours. In the afternoon, after a trip into town, Dr. Mudd discovered that there was a manhunt for Booth and upon arriving back home, demanded that the two leave, and they did.4

The duo roamed aimlessly through the woods, until they wandered onto a ranch owned by Samuel Cox, a Southern sympathizer.5 Booth revealed his identity to him, and discussed the assassination with the man, and Cox agreed to let him stay until his foster brother, Thomas Jones, arrived and would help him cross the Potomac River to reach Virginia, where Booth believed he would be welcomed as a hero.6 Once Jones arrived, Booth demand a newspaper to see what the country thought of his actions. Booth believed that he would be thought of as a national a hero, but instead, the country was infuriated. The newspapers called him a coward and a common cut throat.7 All hopes of being the country’s savior was destroyed, and Booth began to write his final words in his diary.

After Jones led the men across the Potomac, Booth and Herold continued south finding different places to hide from the authorities, until finally they reached the farm of one Richard Garrett in Bowling Green, Virginia.8 It was here the two believed that they would be safe. The Garrett family offered a place in their barn for the two to sleep, and the duo accepted it graciously.9

While Booth and Herold were settling in, Lieutenant Edward Baker was hot on the trail of the assassins and found information that led him and his fifty troops to the Garrett Farm. Within a couple of hours, Lt. Baker arrived at the Garrett Farm and commanded his troops to surround the barn.10 Baker attempted to have Booth surrender, but Booth would not budge. After an hour of dialogue, Herold ran out of the barn with hopes of surrendering. As soon as he was out of the barn, he was arrested and tied to a tree. As more time passed, Baker became impatient. With no intention to kill Booth, Baker set the barn on fire in an attempt to flush him out.11

Booth seeing how fast the fire was spreading ran with his crutches and his carbine in hand to try and put out the fire. While attempting to fight the fire, Sergeant Boston Corbett, a solider that surrounded the barn, took aim and shot Booth right through the neck.12 The soldiers scrambled inside to retrieve his body and while they did Booth began to whisper, “Tell my mother I died for my country,” and begged the soldiers to kill him so he may not suffer. The soldiers attempted to save his life but Booth died that morning.13

Booth, now dead, could not stand trial for Lincoln’s assassination, but the others could. In May of 1865, George Atzerodt, Lewis Powell, David Herold, Dr. Samuel Mudd, and Mary Surratt (Owner of the Surratt Boarding House) were pressed with charges of conspiring to assassinate the President of the United States. After only a month of trial, the jury found Atzerodt, Powell, Herold, and Surratt guilty, and they were sentenced to hang on July 7th, 1865.14 Mudd was sentenced to life in prison, but was pardoned by President Johnson in March of 1868.

The quartet of conspirators were lead to the scaffold and the whole time the team was calm. At a point during the execution Powell exclaimed to the crowd that Mary Surratt was innocent; nevertheless, the group was hung. Mary Surratt was later found not guilty due to the fact there was no physical proof that cited she knew what was happening in her building. Her execution was seen as a major mistake made by the United States Government.15

The purpose behind the assassination of President Lincoln was to have him erased from the memory of history. Booth hoped that after he was dead the country would be saved and that he would be praised by all. Lincoln, in his time, had mixed reviews from the citizens, but after his assassination he ascended into martyrdom, and is now one of the most recognized Presidents of all time.16 Booth, however, is now cast aside and is seen as the equivalent to Brutus, an insane assassin.

Wow, this took a very unexpected turn. I think it was a really good call separating the story in two sections where you did. It heightened the suspense and really helped the overall structure.

I liked the split story, it worked very well for this event. The tale of Booth’s attempted escape is just as amazing as the assassination itself. He was so close to getting away with it. Booth really misreads the mood of the country at the end of the Civil War. The South was given an incredible deal considering how bad they lost. Booth believes himself the hero but he is just more unnecessary pain brought on by these events.

Not disappointing, this story maintained its necessary “continuous motion”, very well done. A lot of research also allowed for the introduction of some the deeper parts of this storyline. while the basics of this story are fairly familiar, it was the deeper background information that really made it great.

This is a great continutation of Part 1. I always enjoy reading about lesser known history and this article certainly had some. I don’t think I heard of this part of the story of John Wilkes Booth and you do a really good job finishing the narrative.

Great follow up to the first article. I cannot believe that Booth believed that he would be considered a national hero. What a narcissist! I was kind of shocked to read that Booth did not kill the Doctor once he found out. He just killed the President and I would assume that if they killed the doctor, they would have had a better chance to get away. No witnesses. I am glad that the US Government pardoned him. He was just an innocent bystander. It is saddening that they executed the hotel owner though. No proof.

The aftermath of President Lincoln’s assassination is honestly insane with many people who were involved or just associated with the conspirators were faced with horrible consequences. I’m shocked about Booth’s thought process because he really believed he would be seen as a national hero but was eventually was hit with the cold reality of what he had done. It is a tragic story because there was people who involved with the assassination of a great president without realizing it due to a man who didn’t like the way the nation was changing. Besides all of that, the author did a great job continuing on the second part of the assassination of President Lincoln.

The aftermath of President Lincoln’s assassination is well documented; but there are many theories on what occurred after the assassination and whether Booth was killed at the Garret farm or elsewhere. The author of this article gives a good description on what occurred. I liked the linkage of how Booth saw himself as a hero. Fortunately, Booth is not recognized as a hero; but as a coward.

The aftermath of President Lincoln’s assassination is well documented; but there are many theories on what occurred after the assassination and whether Booth was killed at the Garret farm or elsewhere. The author of this article gives a good description on what occurred. I liked the linkage of how Booth saw himself as a hero. Fortunately, Booth is not recognized as a hero; but as a coward.

Hello Roberto, I wanted to start off by saying this was a very interesting article. The images you provided allowed me to get a greater visual of the situation. It’s very wild how Booth thought he would be praised for assassinating a US president. He got so many involved into his mess even causing an innocent person to lose their life. Mary was hung with no proof which is very saddening. All of that for nothing and no recognition besides being known as a coward.

This whole article was a very interesting and appealing to me, the way everything spilled out after Lincoln was assassinated is crazy because of the events that happened directly after. It is out of this world and completely unbelievable that Booth after he assassinated Lincoln would be seen as a National hero, and the amount of assassinations and the assassination attempts that led to it.