Sic Semper Tyrannis: The Conspirators of America’s First Assassination (Part I: From Kidnapping to Assassination) 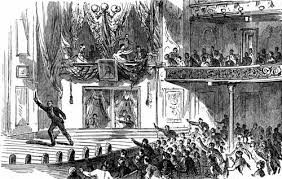 Post Civil War America showed the country as it never was before. Union and Confederate States, though reunited, still held grief directed toward one another. Most citizens just learned to adapt to the situation, but others choose to act out. An assassin will act as a vigilante by murdering a political figure in order to attempt to change the course of history. The first example of this in America was the assassination of President Abraham Lincoln and the attempted assassinations of Lincoln’s Cabinet by a group of vigilantes led by America’s first Presidential Assassin: John Wilkes Booth.1

John Wilkes Booth was born in May of 1836 into a family of actors, and was taught by his father Junius Brutus Booth. The Booth family traveled the country and performed for crowds. Booth was a handsome young man and a glorious actor. He often played the romantic hero’s of Shakespeare’s finest tragedies. Most notably he astounded audiences with his portrayal of Romeo in Shakespeare’s Romeo and Juliet. His good looks and charisma got him through most situations and made him irresistible to young women.2

As the Civil War began, tensions began to rise in the Booth family. John Wilkes Booth was alone in his hatred of the North, and often argued against his Union-loving family. He believed the cause of the Confederates was noble and that southern states’ rights were being ignored. Booth argued that Lincoln was a tyrant that wished to take everything away from the South.3 In 1859, Booth joined the Richmond, Virginia militia, and was assigned to be among one of the men who hung John Brown. Brown was the famous northern abolitionist who planned a slave insurrection and killed five slaveholding men.4 Although he carried deep pride for the Southern cause, Booth never joined the Confederate forces, but instead continued his acting career well into the Civil War.

In 1864, as the war continued, Booth materialized a plan to kidnap President Abraham Lincoln and hold him for ransom for the release of all Confederate prisoners of war.5 To pull this off Booth had to recruit a gang of fellow Confederate sympathizers, and after several meetings, Booth found his perfect team. The first to join his team was John Surratt,  a Confederate agent and son of Mary Surratt who owned the Surratt Boarding House.6 The second was David Herold a Confederate sympathizer; the third was George Atzerodt, who was a German immigrant; the last was Lewis Powell, a prisoner of war from the Battle of Gettysburg.7

On March 17, after six months of plotting the kidnapping, Booth received word that Lincoln would be in their area attending a play at a local hospital.8 The men gathered their gear and laid in wait for their target to arrive. Booth set up a perimeter around a long stretch of road in an attempt to kidnap Lincoln en route to the hospital. After hours of waiting, Booth received new information that Lincoln had changed his plans to attend another event on the same day.9 Infuriated, Booth called his men back to the Surratt Boarding House and threw away any hopes of kidnapping Lincoln.

As the war came to an end and the Union victory loomed as inevitable, Booth and his conspirators became enraged and decided to escalate their plans.10 The group planned to destroy the United States government by assassinating President Lincoln, Vice President Andrew Johnson, and Secretary of State William H. Seward simultaneously. Each of the assassins was given a specific job; Powell would attack Seward in his hotel room, Atzerodt would assassinate Johnson, Herold would supply horses for the men’s escape, and Booth would take on Lincoln himself.11

The plan was set, and now the group only needed an opening. On April 14th, 1865, Booth received word from the manager of Ford’s Theatre, a place where Booth had acted previously, that President Lincoln would be attending that night’s show of Our American Cousin.12 Upon receiving the news, Booth began preparing his men for the night to come. Night fell, and the men headed out, each in the direction of their designated target.

Powell was guided to Seward’s house and when he arrived, he knocked at the door. The door was opened, and Powell pushed his way into the room where Seward laid, and stabbed him in the head multiple times. Powell saw Seward begin to bleed and he fled from the scene immediately. Fortunately for Seward he was wearing head-gear due to a carriage accident he had previously been involved in, and his life was spared. At the same time, Atzerodt headed towards the hotel where Andrew Johnson was staying. Atzerodt first headed to the hotel’s bar to settle his nerves, had a little too much to drink, ended up intoxicated, walked out of the hotel and gave up on the assassination.13  Lastly, Booth began his plot and entered Ford’s Theater armed with his single shot .44 derringer pistol and a large knife.14 Booth then snuck his way into the President’s box and found Lincoln, his wife, Mary Todd, accompanied by Major Henry Rathbone and Rathbone’s fiancee. Before anyone saw him, Booth slid his pistol out of his pocket and shot Lincoln in the back of the head. Major Rathbone jumped toward Booth, but Booth took out his knife and slashed at Rathbone.15

Once he was freed from Rathbone’s grip, Booth jumped from the President’s box, but as he fell, his leg got caught on a drape and as he landed he broke his leg. Pushing himself up, Booth screamed, “Sic Semper Tyrannis!” which means “Thus Always to Tyrants” and pushed his way to the alley where Booth’s horse was waiting, and he rode off into the night.16