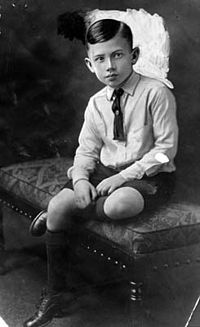 The disappearance of nine year old Walter Collins in 1928 in Los Angeles set in motion one of the most incredible series of events of the decade. The disappearance not only included child endangerment, but also brought to light female disempowerment, corruption, and flagrant mistreatment of those involved in the case.

On March 10, 1928, Christine Collins discovered every parent’s worse fear: her son Walter was nowhere to be found. While the police suspected that Walter had simply run away, Christine feared the worst. She refused to believe that her young boy would run off, so she came to the dreaded conclusion that he had been kidnapped. Now with the suspicion that Walter had been taken, the police began to scan the Collins’ street and the neighborhood of Lincoln Heights in Los Angeles. Local thugs were targeted, questioned, and interrogated on the whereabouts of Walter, but the search turned up nothing. It was not until witnesses were sought out that a neighbor, Mrs. A. Baker, claimed that she saw Walter in an automobile, begging to be released, in the company of two foreign-looking people.1

Other neighbors gave information as well. They said that days prior to Walter’s abduction, an Italian-looking man, along with a woman, were asking for Walter’s address. All information and all leads led to nothing. There was simply no trace of Walter that led the police to finding him or finding out who had taken him. After searching the Lincoln Park Lake for Walter’s body, and after a massive search of the northeastern part of the city, neither Walter nor any trace of him was found. Walter had now been missing without a trace for over a month.2

Christine Collins was devastated, but she remained hopeful that each day she would hear news of her young son. Months passed, and she had to work daily with the racing thoughts of Walter’s fate constantly in her head. Losing sleep and having little motivation to continue her normal life, she did not surrender to the thought that Walter was gone forever. Five months after Walter’s disappearance, a miracle happened. Walter had been found. It was now August, and Christine received the confirming news that Walter was alive in De Kalb, Illinois. It is hard to imagine how much joy, love, and excitement Christine experienced when she heard this news. Her persistent hoping seemed to have worked.3

Walter was immediately put on a train to Los Angeles to be returned to Christine. The reuniting of mother and son was to be celebrated as a massive success of the police force. But as the approaching train came to a stop, with the anticipation of a happy reunion after five agonizing months, Christine immediately exclaimed that the boy who descended from the train was not her son. What Christine thought was the answer to her prayers, the miracle of a lifetime, proved not to be the case. The boy standing in front of her was not her son. Captain J. J. Jones of the LAPD could not believe what Christine was insisting. Jones explained to Christine that Walter simply seemed to change because of the duration of the months and the traumatic experiences that he had encountered. Christine rejected Jones’ explanation. Christine insisted that she would know her own son, no matter the circumstances. Captain Jones would not take Christine’s word for it, and would under no circumstances let it be known that the Los Angeles Police Department had made a mistake. Trying to avoid humiliation, Jones told Christine to take “Walter” home and try him out for a while, to see if her memory would clear to see that this was indeed her boy.4

Christine, feeling the pressure from both the public and the police about the reunion, agreed to take the boy home. Subsequently, the police began to question “Walter” in hopes of finding his abductor. He was questioned on how he had escaped the kidnapper, and the police wanted to know how he had ended up in Illinois. Police and doctors were unable to get straight answers from the boy. He said little to nothing. It was as if he was keeping a secret, and no one could get the boy to say anything that he knew. Christine knew that the boy was not Walter, but she agreed to house and care for him. But she still sought to prove that she was right. She did not want the police to stop looking for the true Walter because she knew that he was still out there. Christine used Walter’s dental records to prove the difference in Walter and the boy who now lived with her. Those records did indeed demonstrate marked differences in the two boys’ teeth. Christine then took the dental records to Captain J. J. Jones.5

But the dental records proved to be no help. Not only did Jones not believe Christine even with the records, he concluded that Christine was only trying to humiliate the Los Angeles Police Department. Captain Jones would not stand for this slander, especially by a woman. So Jones took immediate action. Jones had Christine Collins committed to the psychopathic ward of the General Hospital to be placed under observation under Code 12 internment, which was intended to jail anyone who was proving to be difficult.6

Christine Collins remained in the hospital under harsh circumstances. She was treated inhumanely and fell victim to different forms of medicine to try and bring her to her senses, and for her to admit to this boy being the true Walter. Ten days passed, and then good news came that released Christine. The believed “Walter” had confessed to not being the real Walter. The boy was really Arthur Hutchins, Jr. His true name was discovered even after he provided another fake name of Billy Fields. When questioned as to why Arthur would pose as Walter, Arthur admitted that when he saw a picture of Walter and saw their resemblance, he saw an opportunity. He knew that if he pretended to be Walter, he would have a one way ticket to Los Angeles and an increased chance of making it in the movies, and even meet some of his favorite stars. The disappearance of Walter Collins would now resume, and would now resume from the very beginning. With no leads. Christine returned to her job, and was back to where she had been for nearly half of a year. Her daily routine remained: she would work, go home, and hope to hear about Walter.7

Meanwhile, in Wineville, California, unthinkable events were occurring. It all began to unravel when Jessie Clark was eager to check up on her younger brother, Sanford Clark, who had moved to California two years prior with their uncle Gordon Stewart Northcott and his mother Sarah Louise. Jessie had become increasingly concerned for Sanford’s safety and his situation with their uncle Gordon. She decided to travel down to find out what exactly was taking place. Jessie’s fears of abuse and torment coming to Sanford from Gordon became clear during her visit. And not only was terror being brought upon Sanford, but Gordon even became violent towards Jessie herself. Jessie quickly took action. She returned home to Canada and told everything to her mother who had no hesitation in informing the police of the abuse.8

When U.S. authorities got the information of Gordon Northcott’s actions, they made an immediate visit to his residence in Wineville, to a ranch out in the middle of nowhere. When Northcott saw the authorities driving up, he demanded that Sanford stall them for as long as he possibly could. Sanford did as he was told due to his own fear of Gordon. Gordon and his mother Sarah Louis fled, and were not captured until they were found in British Columbia. Their capture was crucial thanks to what Sanford had told the police about Gordon and Sarah Louise. Sanford Clark informed the police that Gordon Stewart Northcott and Sarah Louis had murdered the missing boy, Walter Collins. Sanford also admitted that Walter was not the only boy who fell victim to the Northcott’s hand, but other boys remained at the farm as well. Sanford Clark told everything to the police about what took place. He said that the boys were killed by an ax, and that quicklime was poured over their bodies before disposing them.

In shock and disbelief, the police, with Sanford by their side, returned to Wineville to dig up the remains that Sanford claimed were there.9

Physical remains were found on the farm proving that boys had been there, including the Winslow brothers who had gone missing only 30 miles away from where Walter had been taken. Library books belonging to the boys and clothes had been found in the chicken coop, where the Northcotts kept the boys locked in. A note written by the Winslow bothers was even discovered, simply saying, “Don’t worry, we are fine.”10 When Sanford took the authorities to the graves, the bodies no longer remained; only pieces of bodies were found. Gordon Northcott and his mother had emptied them and burned the bodies and remains in the desert before Jessie Clark informed the authorities about the negative conditions Sanford faced. Some human bones and a blood-soaked mattress did turn up, and it proved that Nelson and Lewis Winslow, Walter, and a ranch hand, Alvin Gothea, had all been tragically murdered.11

It was December 3 when Gordon Stewart Northcott confessed to the murders of the Winslow brothers and Alvin Gothea. Sarah Louis Northcott confessed to the murder of Walter Collins. Gordon Northcott hinted that there were more than four boys that fell victim to his murderous activities. It is believed that the Northcotts may have been guilty of killing at least twenty. Gordon Stewart Northcott was found guilty of having committed three murders, and was sentenced to hang. His mother, Sarah Louise, was also found guilty of the murder of Walter Collins and sentenced to life in prison.12

This did not please Christine Collins. Walter’s entire body had not been found, so she still held out hope that her son might still be alive. She decided to go meet the man who was said to have taken Walter, Gordon Stewart Northcott. Collins met with Northcott to discuss whether or not he and his mother had truly killed her son. Although Northcott had previously admitted to the killings being done by them, he told Christine that they did not kill Walter. Christine believed Northcott. She chose to believe that this man did not take part in killing her son so that she could hold out hope that he may one day return.

These slayings have become known as The Wineville Chicken Coop Case Murders, and Gordon Stewart Northcott was hanged on October 2, 1930 at San Quentin, California. Christine Collins was granted $10,800 against Captain J. J. Jones for his sending her to a psychiatric ward, and for his denial at believing her claims that the boy returned to her was not Walter. But Jones never paid her, and was only given a four month suspension for what he had done against her.13 Christine never gave up hope that Walter remained alive, but he remained unfound for the remainder of her life.