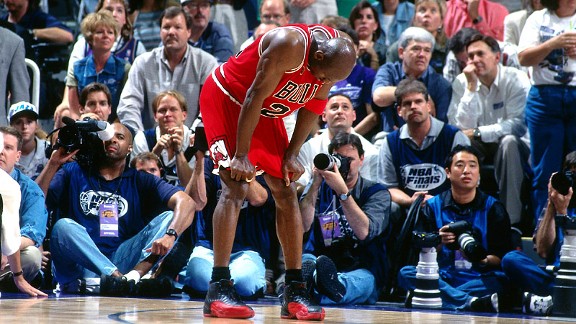 It is two o’clock in the morning on June 11, 1997, the day of Game 5 between the Utah Jazz and Chicago Bulls in the NBA 1997 Finals. Michael Jordan’s trainer, Tim Grover, is called to Jordan’s hotel room, where he finds the six-time M.V.P. guard curled up in a fetal position on his bed with a scorching fever and terrible chills. Jordan was having trouble even standing on his feet, and rumors began to spread like fire, and the question quickly circulated, “Will Michael Jordan play in Game 5 of the NBA 1997 Finals against the Utah Jazz?” Back in the 1990’s basketball was a different ball game, with bigger crowds and a higher level of talent. The game featured the best of the best, with players like Michael Jordan himself, Scottie Pippen, and Karl Malone. So it was a big deal to many fans when Michael’s playing status was put into question. They suffered a tough loss to the Utah Jazz in Game 4 on the road, loosing 78-73, and that tied the series 2-2. With Game 5 being held at the Utah Jazz Delta arena, a win was a must for the Bulls. Fortunately, at 5:50 pm, Jordan rolled out of bed and somehow made it onto the Delta Center’s court right before the game start, and was ready to go before tip off.1

Born in Brooklyn, New York, on February 17, 1962, Jordan grew up with a love for baseball just like his father, James Jordan. Growing up in Wilmington, North Carolina, Jordan developed a very competitive edge at an early age. He wanted to win every game he played. As his father noted, “Jordan has a competition problem. He was born with that … the person he tries to outdo most of the time is himself.”2 As Jordan began to get older, however, baseball would soon come to a halt as he began to follow his older brother’s passion for basketball. Although Jordan was cut from his high school varsity basketball team during his sophomore year for apparently not being “good enough,” that did not stop him from attending University of North Carolina at Chapel Hill to lead his basketball team to a NCAA Division 1 championship in 1982. He then went on to be the third overall pick in the 1984 Draft to the Chicago Bulls. Although many questioned Jordan’s ability to play at that next level of competition, the Bulls clearly made the right decision in picking him up. He soon was the face of the Chicago Bulls’ franchise, racking up three consecutive championships in the years 1991, 1992, and 1993, and then adding another one in the year 1996.3 Now with the 1997 NBA Finals tied at 2-2, and the Chicago Bulls seeking their fifth title, play-by-play commentator Marv Albert let viewers know before the game that Jordan was suffering from “flu-like symptoms”–a term that has grown in lore since this performance.4

With Jordan being unable to function and appearing lethargic, the Jazz began to sense victory as they were sure they were going to beat the Bulls, due to the Bulls not having their star player. As the game began, Jordan obviously looked weak and out of it, and this sparked the Jazz to go on a 10-0 run, taking a sixteen-point lead in the first quarter. People believed that this game was doomed from the start. However, Michael Jordan would soon prevail by scoring an incredible 17 points. At every dead ball, Jordan quickly sank to his knees with signs of exhaustion. But that did not stop Jordan from closing the lead gap to 4 points, making the score 53-49, with the Jazz still being up. Many fans looked in amazement as Jordan fought through the sickness. They soon began to realize that this was “the game” to watch. During half time, Jordan was hooked up to an IV, as he was facing dehydration, and he was given cold towels to keep his body from burning up.5

“I have never seen Michael as sick as this,” teammate Scottie Pippen said during half time. “It was to the point, where I did not know if he was going to play.”6 Jordan began to throw up outside the locker room and his trainers began to question his playing status. After a long debate on whether Jordan should continue the game with his health being on the line, and as half time was coming to an end, a very fatigue, but determined Jordan, unhooked himself from the IV and began to head to the court, focused on getting the win for his time. Still down by 4 points (53-49), Jordan was not going to quit this fight.

As the third quarter began to roll in, it seemed like the sickness was single-handedly beating up Jordan, and every possession began to get harder and harder for him. This sparked the Jazz to take advantage of the sick Michael Jordan, allowing them to stretch their lead by 8 points. This caused Coach Phil Jackson to burn out their timeouts to allow a very fatigue Jordan to catch his breath, only to see him collapsed on the bench while trying to chug fluids to replenish his weakened body.7 Jordan was silent during the third quarter as he was forced to sit out the majority of the quarter as the trainers were trying to rehydrate his body as best they could. As the third quarter ended, the Jazz were leading 77-69, and although the game was going on, all eyes were on Jordan as he battled to continue to stay on the floor. Many were surprised that he was even still on the floor, but what made many people impressed was the amount of heart he showed for his team and for the game.

With the fourth quarter starting and the game being close, Jordan knew the game was not over yet and that there was still enough time to make a come back. He knew if he wanted to take the lead, he had to act quickly and smart, without over exerting his body. Jordan soon sprung into action, scoring a quick 6 points. Once that began, there was no stopping him. A burst of adrenaline began to fill his body. His team began to feed off of his energy and by the end of the quarter, the Chicago Bulls were able to close the lead to 85-84. With only 46 seconds left, Jordan was fouled, and he headed to the free-throw line. He sank the first one to tie the game. Then, he missed the second one, only to have his teammate, Toni Kukoč,  get his offensive rebound to pass back to him, which allowed the Bull’s offense to set up. With 25 seconds left in the fourth quarter of Game 5, the Bulls had to act quickly. With it being Chicago’s possession, they were able to execute the play precisely. Pippen got the ball…he was being double teamed…Pippen dished a pass back out to Jordan…Jordan took the pass, looked up, and sank a three-pointer! The Bulls took the lead for the first time in the game. Jordan’s three was the game changer. The Bulls clinched the win for Game 5, putting them in the lead in the series 3-2. As the buzzer went off at the end of the game, a fatigued Jordan collapsed into Scottie Pippen’s arms as they walked off the floor, creating a memorable moment for not only a teammate but of a special friendship between Pippen and Jordan, which is still talked about today.8

Those were the words that came from a very sick Jordan after Game 5. He ended up with an astonishing 38 points, 7 rebounds, 5 assist, and 3 steals to finish out the game.9 The Chicago Bulls then went on to win the 1997 NBA Finals in Game 6 in Chicago, making it Jordan’s 5th Championship Title. This is a story that all Chicago basketball fans know well. Michael Jordan is an individual that transformed the game in many different ways and is a role model for many people, especially for young individuals who need a positive role model to look up to. This game was just another example of why he is consider the best of the best. He was thrown adversity and handled it like a legend. He did the unthinkable and beat his own flu game.