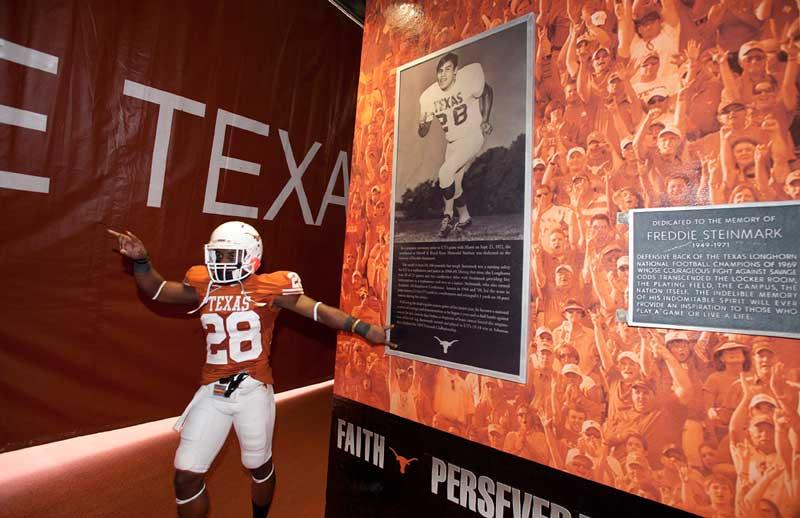 Before a university football game, the pressure can be overwhelming. A University of Texas football player, in Austin, can find guidance in the picture that hangs eight feet above the ground before entering the Joe Jamall field. He kneels down before the picture and reads: “Courageous fight against savage odds transcended the locker room, the player, the field, the campus, and the nation.” Once he stands up, the courage within him rises as well. The picture shows Freddie Joe Steinmark guarding the field and guiding every longhorn who enters.

Freddie Steinmark was causing damage on the football field since the day he started playing. Young Freddie was not on one, but two football teams. He knew the game inside and out. His father, Big Freddie, “preached the doctrine of ‘110 percent effort’ every play, every drill, every day and taught that friendship ends on the playing field.”1 Freddie took his training to the next level each day. He marched his way to the tallest, steepest hill of Colorado after his practice everyday. Inside the Steinmark house, you would hear young Freddie telling his mother to bring out the peas and protein, because Freddie knew he had to grow in order to be the best. Freddie’s main motivation was his dream of earning a scholarship to go to a university to play safety, and on to the professional leagues.

Since his senior year of high school, in 1967, nothing much had changed in Freddie’s future plans.2 Unfortunately, Freddie was not on any of the Division 1 major universities’ radars. Even though he was known to be possibly the biggest athlete in Colorado and was awarded the Best Scholar-Athlete in the state, the universities paid little attention to him. Although he had the skillset of star safety, because of his short stature, no one wanted to give him the chance to play. That is, until Darrell Royal saw a game film of Freddie and was impressed by the amount of damage he was able to do on the playing field. Royal himself was a small-physique player who ended up playing for the Oklahoma Sooners. Royal saw a fighter in Freddie like he had never seen before in any player. Therefore, Royal gave Freddie the opportunity to make his dream come true by offering him a full scholarship to play on the University of Texas’ Longhorn football team in 1967.

For the next two years, Freddie would be one of few players able to handle the intense training of college football, earning him the starting position of safety his junior year. Through his position and courage, Freddie obtained his team the path towards the Cotton Bowl in 1968-69. Throughout this journey, Freddie started to notice that he had a pain growing within his knee. Despite the pain he felt on a daily basis, Freddie ignored it more and more as the Longhorns got closer to the National championship against Arkansas University. But it soon became more difficult to hide the pain, as Coach Royal started to notice Freddie’s limp during the games and his struggles of getting back up from a tackle. Royal demanded that Freddie to go to the doctor to get his knee checked, but with Freddie’s strong desire to play against Arkansas University, he begged to push back the doctor visit in order to guarantee his team a spot in the Cotton Bowl game against Notre Dame.3 Although Freddie struggled within in the game, he still conquered the field, earning the Longhorns their spot in the Cotton Bowl after over a decade. After a well-played game, the Texans went back to celebrate their victory. During the celebration, Freddie knew that his pain had worsen; therefore, the time had come to get examined by a professional and be ready for whatever was to come.

Instead of preparing with the rest of the team for the Cotton Bowl, Freddie was in the University’s assigned doctor’s room waiting for his X-rays to come back. Once the doctor came back into the room, there was silence. Deep down Freddie knew that something didn’t seem right and was afraid about the news that he was about to receive. The doctor told Freddie that he would need to go to Houston’s MD Anderson hospital in order for professionals to take over. Freddie was confused as to why he had to travel three hours for just a pain in the knee. The doctor explained that there were many possibilities for why Freddie was having such sharp pains in his left knee, but the most probable reasons was that he had a tumor. Upon arriving to Houston, it was discovered that inside his left thigh Freddie had grown a cancerous tumor the size as a softball.4 The doctor had said that Freddie shouldn’t have been able to walk at all with that amount of discomfort in his leg, let alone play football in this condition, which, however, was no surprise to Coach Royal. The only way of removing the tumor was to amputate his left leg up to his knee. Freddie was a fighter and right now he was entering the fight of his life with his surgery and the events that would follow after it.

No longer able to stand, Freddie laid in his hospital bed alone. He had only two choices: to lay there for the rest of his life, or get up and go to the Cotton Bowl to cheer for his team. The next few days were a struggle, with Freddie trying to walk again. He would tumble and fall, but with his love of football in mind, he would always get back up. Twenty days after his amputation, his team was left in the locker room in despair. They all believed that there was no way that they would be able to beat the national-ranked football team without Freddie’s guidance on the field. As the Longhorns were beginning to lose all hope, the locker room doors opened, revealing the shining light they were desperately missing. With no one able to say a word, Freddie walked into the room, leaving his teammates paralyzed.5 They couldn’t believe Freddie was actually there, walking as tall as ever. As Freddie made his way to his locker, he sat down and put on his cleats, showing his teammates that it was game time. Leading his team out onto the field, the world was left in shock. No one was expecting to see young Freddie Joe Steinmark at the game, let alone up and walking. This was the beginning of Freddie being the symbol of true courage when times are rough. As the game began, the Longhorns’ hope lifted as each of them wanted to win Freddie the game ball. Although it was a tough game, the Longhorns were able to steal the win 31-16, winning the Cotton Bowl.

Two years after what seemed to be the best time for the Longhorns, the worse day came. Filled with gloomy days following the news of their teammate Steinmark passing away, the team knew that his legacy shouldn’t die with him. Freddie was one for the ages; he was an endless life. In the few years he had left, Freddie had become a symbol of not only courage and faith in football, but also of courage in the fight against cancer. He became an activist for the awareness of cancer; he also became a coach with Coach Royal for the Longhorns. Once his battle against cancer took over, his life didn’t end in 1971. Freddie had become the most ideal football player known, not for his size, but for his love for the game and the way his courage was able to let him read the playing field. He hangs in the hallway guarding every Longhorn that enters the field.6 A part of Freddie is within each player that enters that field, as he is their inspiration before every game. His story not only defined the true definition of a player, but defined a true fighter, because with every curve ball thrown, he would catch it and throw it right back.