James Doolittle: The Man and the Raid 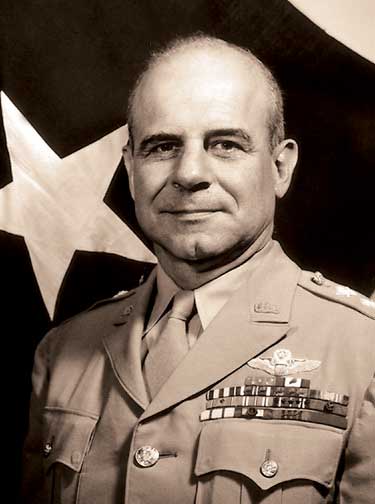 The United States’ entrance to World War II was sudden and unexpected, and Americans were stunned by the Japanese sneak attack at Pearl Harbor. While the Germans had attacking Poland, France, and Great Britain in the years just prior to Pearl Harbor, the U.S. had remained technically neutral, and isolationist, but some American leaders believed that the day would come when U.S. involvement would be necessary. Japan’s attack on Pearl Harbor on December 7, 1941 completely united American resolve. Japan’s sneak attack succeeded in removing much of the U.S. naval and aviation power in the Pacific. The Japanese had about six months of initial success at expansion in the Pacific, and then the United States began to turn things around. The turning point was the Battle of Midway in June 1942; but something occurred shortly before Midway that may have been a turning point of a different sort: the Doolittle Air Raid on Tokyo.1

The Doolittle Air Raid’s namesake comes from James Harold Doolittle, an army pilot, and so much more. Doolittle’s early biography includes boxing and motorbiking, signifying his daring nature, something that he retained all through his life. As a young adult, Doolittle went to the University of California, Berkeley to obtain a degree in engineering, but dropped out to join the Army as a 2nd Lieutenant to become a pilot. His beginnings in the army were not specifically spectacular, as he did not even fly overseas during World War I, but his skill in an aircraft was quite the opposite of his army beginnings. He began air racing, and was exceptional, winning many events and setting new records with almost every win. Doolittle was also involved in the advancement of the safety of aviation, by involving many different instruments in flight. Doolittle was eventually awarded a degree from the University of California, Berkeley, and went on to study at the Massachusetts Institute of Technology, to further his engineering and aeronautics interests. During his study, he was still an active pilot, helping to pave the way for other pilots, which also helped him earn his degree. With multiple degrees and a background in aircraft racing, Doolittle was awarded a few medals and was seen as one of America’s most experienced pilots before the age of thirty. Despite this, Doolittle wanted a higher income, and so he resigned from the army and began working for the Shell Oil Company. This didn’t last long; World War II began. Doolittle requested to be reinstated in the Army.[2. Encyclopedia of World Biography, 2004, s.v. “James Harold Doolittle;” The Scribner Encyclopedia of American Lives, 1991-1993, s.v. “Doolittle, James Harold,” by George M. Watson, Jr..]

Upon returning to the army, Doolittle was quickly recruited for the Pearl Harbor Revenge Plan: the bombing of Tokyo. Fueled by patriotism and passion, many leaders in the United States Army wanted to perform a raid on Japan’s mainland. However, because Japan was much more prepared for an attack than the United States had been for Pearl Harbor, there were many problems with a mainland raid. For one, the planes could not make it from a land base all the way to Japan, as they would just run out of fuel. Second, aircraft carriers could not get close enough to Japan to give the planes a shorter route so that they would have enough fuel, because Japan’s navy was quite large and spread out at this time of the war. Third, who would lead this attack and train the men to perform such a raid? And would it all be worth it?

Doolittle and others came up with a plan that would use America’s medium B-25 bombers, which could make the flight, starting from aircraft carriers. The aircraft carriers would not have to be dangerously close to Japan’s navy. Still, however, another problem was raised; the bombers would not be able to return to the aircraft carriers. So Doolittle and his team came up with the idea that after the raid, the pilots would land in United States’ ally China’s territory, and the planes would be given to the Chinese military. Furthermore, Doolittle was able to convince his superiors in the Army Air Corps to allow him to lead the raid. He began training the pilots that would fly these fairly new planes. The aircraft carriers then went out to sea, and because they were spotted early, the planes took off from the carrier Hornet on April 18, 1942, and the raid commenced.2

The damage to Tokyo from the raid was quite small. In fact, the raid netted about even in losses on both sides. Japan had about 50 Japanese killed and 400 injured with a few aircraft shot down and some patrol boats sunk. This does not nearly equal the damage done at Pearl Harbor, which was what the U.S. was avenging. Furthermore, all but one of the planes that were used in the raid were heavily damaged, and three of the members involved were killed, and eight were captured. Most of the men involved did make it to China, despite their aircraft being heavily damaged. Doolittle was included in the survivor pool. Although the aforementioned damage to the Japanese and observable contribution to the war wasn’t very significant, the way this raid played on both Japanese and American morale and emotions cannot be overstated. Both of these countries were very patriotic, and the Japanese did not like losing at all. In fact, they would rather commit suicide than surrender, as was demonstrated in the later phases of the Pacific war. Although the Japanese didn’t necessarily lose very much, they felt as if they could not defend their homeland, that they had lost, and their pride was weakened. But the event played a similar, positive role on the Americans, as they felt like they finally were on the offensive, and weren’t just recovering from Pearl Harbor anymore.3

This raid was vital to the strategic impact on the war. To defend their land, the Japanese recalled aircraft that were set up near Midway and other islands, opening up this area for the Americans to advance. The later Battle of Midway was very successful, as the Japanese ended up losing four aircraft carriers, the most important naval units during World War II, and pushed the Japanese away from Midway and various other islands. This battle only strengthened both of the aforementioned psychological impacts of the Doolittle Raid and began to turn the war in the United States’ favor.4

Doolittle received recognition for his raid and overall efforts in the war. He was granted two promotions, which classified him as a brigadier general, and was granted the Congressional Medal of Honor, which is the highest military award. Doolittle then served under General Dwight Eisenhower in a planned invasion of Africa. Unlike many others, Eisenhower didn’t immediately hold Doolittle in high regard; but eventually Doolittle’s prowess won over his superiors. Doolittle had much success here as well. Doolittle was again promoted, this time to a major general. Doolittle was prolific after this, but he didn’t do anything extremely extravagant, but still performed many campaigns that contributed to the war effort. Later, he was promoted to lieutenant general.5

When the war was coming to a close, Doolittle had gone through multiple ranks in the military, and let his namesake raid and various other missions generate for him quite the fame and helped boost the morale of the American people. After the war, Doolittle served in the reserves, and returned to the Shell Oil Company, where he worked up the ranks, much as he had in the army, and he became vice president. From time to time, Doolittle would take breaks and do some private work for the government. Doolittle’s skill and background made him a very sought after adviser, particularly when it came to aviation, war, and strategy. Doolittle had married a little before the war, and had two sons. After retiring from Shell, one of Doolittle’s sons committed suicide, which, despite all of his wartime efforts, the loss of his son could be assumed to be his most difficult battle. Later on, his wife passed away. Near the end of Doolittle’s life he was still awarded various medals, with the Presidential Medal of Freedom ranking the highest. With this medal, Doolittle had received both the highest military and civilian medals. This was truly spectacular. Doolittle died five years after his wife, in his sleep, at the age of ninety-six.6

James Doolittle led a life that was very adventurous, meaningful, and important in terms of his country. He successfully led a raid that not only raised American spirits in a time when they were low, but also diminished the enemy’s. Furthermore, his numerous contributions in the world of aviation cannot be overstated, and his prowess with a plane cannot be compared.