The Traumatizing Actions of World War II: The Bombing of Sandhurst Road School 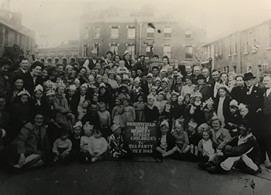 It’s another day of school. You wake up early and get ready. On this particular day, however, you didn’t feel like going. You debate with your mom, but you already know she’s going to say no. Knowing this, you decide to still test the waters, and as you suspected, she says no, and you go on your merry way with your tail between your legs because you really didn’t want to go to school today… more than usual. Before you know it, midday rolls around, some of your classmates are getting ready to go to the theater, and others are eating. Then, you hear something. At first, you are not sure what it is, but as it gets closer, you make out that it is a plane. Before you can think anything else, the whole school collapses on you and every other classmate and teacher around you, and at that moment, after hearing the news, your mom wishes she would have let you skip this one day of school.

No air-raid warning had been received. The only warning was the noise of the plane getting closer to Sandhurst Road School near south east London. On midday of the 20th of January, 1943, a Nazi aircraft flew over south London. After passing the first time around and shooting down an innocent seven-year-old girl, Hauptmann Heinz Schumann, the German pilot, came back around once more and finished the job by bombing Sandhurst Road School, causing classmates, families, and many more a terrible pain that could only be felt by those who have lost loved ones due to a war that they had no part in.1

Many parents felt the guilt of sending their kids to school on this Wednesday when they recalled their child telling them “bye, see you later” in the morning, and were now crushed under multiple layers of material that once formed the structure of Sandhurst Road School. By the grace of God, however, not every parent had to feel the pain of never hearing their child’s voice again. Some children were lucky enough to survive, but not without some physical remembrance of the day their lives changed forever. Some went home with no movement in their legs. Others went home without their big brother or little sister. These were not the only tragic incidents, however; similar to the case of the seven-year-old who got shot down in the playground, many kids were left unrecognizable, leading to them not being identified.2

Survivor of the bombing of Sandhurst Road School, Molly Linn, as well as other survivors, lived to recall and tell her story to news reporter Amanda Cable. “Spirits were high at Sandhurst Road School,” said Amanda. If the children were not eating, they were giddily waiting for a trip to the theater. “Many of the older girls had been cooking that morning and were looking forward to showing their efforts to their mothers back at home,” she recapped. “Meanwhile, in the playground, a little girl aged around seven skipped merrily by herself. When she heard the roar of an engine overhead, she stopped and waved, assuming the swooping plane was an RAF bomber.” Molly then explained how the pilot waved back at the little girl, and she turned her “sweet little face upwards in a smile. She probably never had time to spot the swastikas under the wings, before German pilot Hauptmann Heinz Schumann sliced her down with a round of machine-gun fire,” said Molly.3 On this day, 32 children and 4 staff members were killed, and 60 were hurt; many were buried for hours with their dead peers and teachers. “Six children later died in the hospital,” said Amanda, making it a total of 38 innocent lives lost. The suffering did not stop there, however. For those who survived like Molly, she spent a total of three years in the hospital, and in 1944, her left leg was amputated. She said, “I had endured so many operations that I just accepted it.” Then in March 1945, her other leg was amputated, allowing her to finally go home in October of that year.4

The physical damage was not the only thing these children had to endure. In other cases, like the Mary Burch’s case, her jaw was fractured and had wood coming out of her head and back, but she was lucky enough to survive; her brother, on the other hand, was not. Mary had been sick, causing her to not attend school until the day before the bombing. “I had become friendly with three other little girls, and I wanted to sit with them while I ate. Mother said no, but my brother John said, ‘Go on, Mum, let her stay. I’ll stay with her and look after her.’ As a result, he died–and she never forgave me.” Mary constantly carried this guilt around, and if she ever tried to forgive herself, her mother made sure to not let this happen. Mary was unaware of her brother’s death for two years, and it was not until she overheard two women talking about the incident that she finally discovered what had happened to her brother. After learning the truth, if she ever misbehaved, her mom would say, “The wrong one lived.” The mental damage did not stop here. “The night before my own sons’ christening,” she explains to Amanda, “she took the baby from my arms and said, ‘You don’t deserve a son because you killed mine.’”5

The bombing and air raid of Sandhurst Road School was a terrible tragedy. Innocent lives that will never know what it is like to turn double digits, how to drive, and experience high school or college as a whole were lost this day. Parents felt a pain that no parent should ever have to feel, and siblings wonder what it would have been like if they did something different on this Wednesday. All feel this terrible guilt, but still, no one is to blame, but this terrible bloody war that later ends up causing more tragedies: World War II.

It’s sad to know that those kids will never grow up and make memories with others. I have never heard about this incident, but it also reminded me of the war that is happening in Ukraine and Russia to where on the news they are pulling out people from rumble of Russia bombing towns and cities. When I see this stuff happen where it involves kids, it makes it sadder since they were not even involved in the conflict.

Hi Joanna, I have never heard of this incident before. Your article was very educational and I’m glad you are not letting people forget what horrors war brings. The part about the little girl waving at the pilot and him waving back made my stomach sick. It’s easy to emotionally distance yourself from learning about WWII when it’s all statistics and soldiers. It’s different when personal stories and quotes like this are used.

Hello JoAnna, First of all, congratulations on your nomination and getting your article published! This is the first time hearing about this incident, but your article itself was really educational and well-written. It still pretty sad to hear in a historical event how kids can be involved. It’s also impressive how the author used quotes from different people, and it makes you feel different while reading this article. Overall, good work and good luck!

Your opening to your article was riveting. It set the tone for the rest of the story nicely. I had only heard a brief mention of this incident before, so thank you for expanding my knowledge. It is heartbreaking to read about all of the innocent lives that were lost on this day. Survivors’ and parents’ feelings of remorse and sorrow, thinking that they could have possibly changed the outcome when they certainly could not have. It was even more saddening to read about Mary’s case, and the emotional trauma she experienced from her mother. Overall, this was a really captivating article and you did a great job! Congratulations on your nomination!

Hello Joanna, you made a really good article. I had some previous knowledge about the horrors that many soldiers had to go through during world war two, but nothing like what you wrote about before. Thank you for sharing it and explaining it so detailedly. You used very good images that helped me reading through it and a lot of sources that made your article trustworthy. Very good job.

This was an extremely well-written article, and it was so detailed. It was so interesting because I did not know much information about this specific attack in London during World War II. It is devastating that innocent children had to suffer from the German brutality. This attack was so random and evil. This article truly furthered its audience to understand the brutality of the Nazis.

I have never heard of this incident before, but after reading the article, it’s awful that this happened. Innocent lives were taken on that day, and a lot of families whose children died were changed forever on that day. The story about the seven-year-old that got gunned down by that pilot is sickening. Overall, a great article and a great read, and I liked how you structured everything!

Its really sad to think that parents actually place guilt on their children because of a horrible act from others. I find it really sad that the mother blamed her daughter and constantly placed that blame on her because of this event, even though her daughter could not have stopped it from happening. I find it really horrifying that the little girl smiled and waved at the pilot and that he smiled back and then he murdered her in cold blood. I want to know why this school was chosen and what was it’s significant.

This was a very interesting article. It is crazy to think about what seemed like a perfectly normal day at school turned deadly in the manner of seconds. I could not imagine the last thing you hear is the terrifying sound of a plane getting closer and closer. It is unbelievable to hear about stories from survivors and what they experienced that day.