The Washington Riots: The Fight that Never Stops 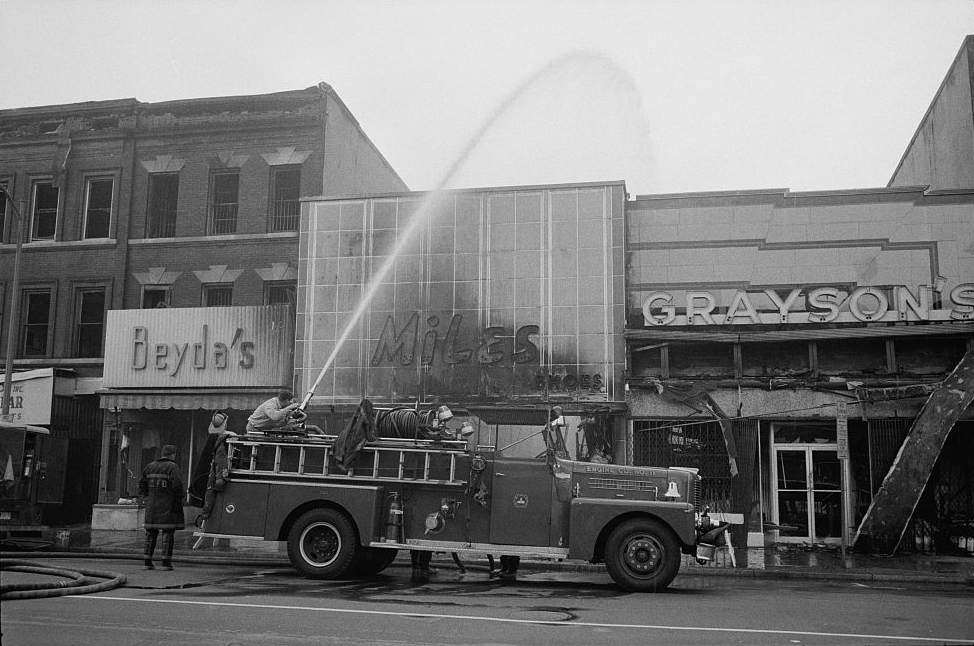 Equal Rights has been a topic since the beginning of time. Minorities have always wanted equal treatment. Throughout U.S. history, many people have treated African Americans as lesser by segregating them in churches, schools, buses, restaurants, and many more places. People knew that they must take action if they wanted to make a change. Martin Luther King Jr., a civil rights activist, was a prominent leader in society who publicly spoke out to make changes in the U.S. Due to his choices in publicly supporting the fight for equal rights, his life was not by any means “easy.” For example, angry protestors bombed King’s family home because they did not agree with what he stood for.  He was also arrested numerous times including his arrest in one of the most solidly segregated cities in the South — Birmingham, Alabama.1 However, these challenges did not stop him from being public with his cause. He continued to fight for what he believed in when he gave speeches and protesting among the many who believed in his fight. On April 4, 1968, just after 6 PM in Memphis, Tennessee, Martin Luther King Jr. stood on the balcony of the Lorraine Motel just before he was shot in the neck by James Earl Ray. He passed away on the scene.2 The world was outraged.

Once the news was out about MLK’s assassination, people across the country felt anger. Their leader who fought to make this world a better place was assassinated. They decided that each of them had to come together as a voice of their own and continue the legacy Martin Luther King Jr. started during his short life on earth. One way they thought to do so was through riots in cities like Washington D.C.

King was in Washington D.C. during the early months of 1968, because he planned on launching the Poor People’s Campaign. He developed the campaign to bring thousands of impoverished people of all races to the nation’s capital and raise awareness of persistent poverty across America. The Sunday before his assassination, he preached in Washington, “We are not coming to tear up Washington. We are coming to demand that the government address itself to the problem of poverty.”3 The people in Washington D.C. felt a deep connection with Martin Luther King Jr. for he was always visiting their city to fight for advocacy.

As the news broke out about his assassination, crowds gathered at the intersection of 14th and U Streets in Washington D.C.4 Many people walked into businesses and demanded them to close down their stores in honor of King’s life. The riots began at about 9:30 PM when someone shattered the plate glass window of the Peoples Drug Store on U Street. This riot lasted for the course of three days. The outrage spread to the black commercial strips along Seventh Street NW and H Street NE, as well as to black neighborhoods on the Far Southeast. As the riots continued, rioters not only smashed the windows, but they stole from businesses as well. It spiraled out of control, and the police became involved.5 Police officers deployed tear gas as a tactic to disperse the large groups. However, quickly fires started to erupt inside businesses along the streets of downtown.[6. Samuel J. Walker, Most of 14th Street is Gone (New York: Oxford University Press, 2018), 49.]

The riots continued and accomplished nothing but the town’s destruction. Firefighters tried to put out the fires, however, they were met with stones and bottles thrown at them. Walter Fauntroy (a leader of BUF-Black United Front), Ruth Bates Harris, and other black leaders walked the streets encouraging people to put it to rest and go home. Despite encouragement to end active riots, they continued. The police were outnumbered, and it is believed the ratio from the people rioting to police officers to be hundreds to one. Mayor Walter Washington toured Fourteenth Street by car that evening and watched as looters happily clambered through broken store windows with stolen clothes, electronics, and other goods. A black Star reporter, Paul Delaney, who accompanied Washington, wrote, “There was a sort of holiday gaiety about it all, people laughing and talking.”6

The riots lasted all night, the police knew they had to come in prepared that next morning. “That Friday morning, police officers lined the streets of downtown with tear gas and smoke.”7The gases were visible all throughout the city. Despite this chaos, Mayor Washington declared schools and government offices would remain open. He also ordered that the town be cleaned up.

However, at the morning press conference, Stokely Carmichael, a prominent American socialist organizer in the civil rights movement, defiantly called on black residents to arm themselves in preparation for a war of liberation. Washington D.C. did not have official gun restrictions until almost a decade after the riots. Later that afternoon he told the crowd, “We will go out tonight”8 While waving a gun, he called “Don’t loot – shoot.”9 At this point, the riot was dangerously out of hand. President Johnson was called to step in by Mayor Washington. He ordered the National Guard, the Eighty-Second Airborne Division, and the 503rd Military Battalion into the city. As the news broke out about military involvement, many of the people fled the city. However, violence persisted throughout the town with “fires raging unattended, sidewalks heaped with soggy mashed loot, smoke covering all.”10 By dawn on Saturday, the 13,600 federal troops had regained D.C. under their control, and “It was the largest deployment for any riot in the nation’s history.”11

The businesses that were set on fire were not chosen at random. Rioters avoided black-owned businesses, which identified themselves with “Soul Brother” signs in their storefront windows. The 14th and U neighborhood was the center of black activism in the city; the local offices of black leadership groups were clustered there.[13. Samuel J. Walker, Most of 14th Street is Gone (New York: Oxford University Press, 2018), 49.] Ben’s Chili Bowl on U Street stayed open throughout the riots as a center for community activists. Safeway-a grocery chain reviled in the black community since it fiercely fought the New Negro Alliance decades earlier- found its store “particularly hard to hit.”12

Because of all the riots, Mayor Washington set a couple of temporary rules. He banned the sale of alcohol, flammable liquids, and firearms. He also imposed a nightly 5:30 p.m. curfew that remained in effect for one week. The city’s annual Cherry Blossom Festival Parade was cancelled. The effects of the post riots caused 13 people to lose their life during the riot, mostly due from smoke inhalation. More than 900 businesses were either damaged or destroyed. It left roughly 5,000 people jobless. According to the Post, roughly 20,000 people were involved in the rioting and 7,600 people were arrested (primarily for disobeying curfew). Only to be detained and later released for they had no space for all of the people being arrested.13

Despite the outcome of the rioting (arrests, damages to town, deaths, and injuries), the black community defended it and was proud of the stand they took. No one backed down, but instead continued to fight in hopes of being heard. News about the riots spread all across country. African American inhabitants in D.C. felt as though the riots served a useful purpose. Reverend Channing Phillips of the Black United Front argued, “Washington now has the opportunity to rebuild politically, socially, as well as physically.”14 The black community finally felt as though they were heard. From here on out, things could only go up for them since this was rock bottom. It was a brave notion for people to stand up for their rights. Their reasoning for rioting was to be heard. They accomplished this by having people understand that racial profiling is not all right. However, this fight for equality will never stop. By fighting for equality, they are carrying on the legacy of Martin Luther King Jr.