Witches: The Hocus Pocus in Salem 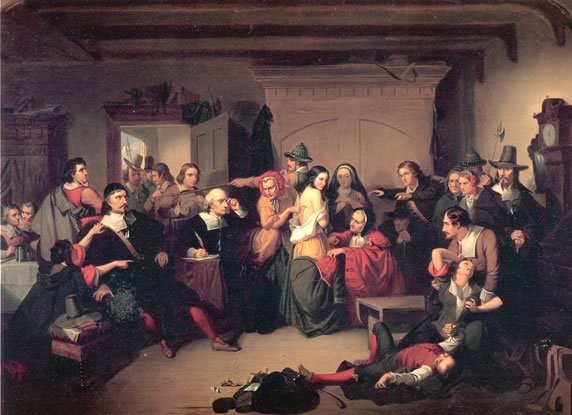 Why would adults in Salem, Massachusetts in the 1690s take the accusations of nine year old girls seriously? During the seventeenth century, New England had grown diverse. The people living in the communities were of different backgrounds. But in the 1690’s there was an apparent outbreak of witchcraft. The most famous of these outbreaks was the event in Salem, Massachusetts in 1692 that stirred up the Salem community and soon spread to other communities.

The widespread hysteria over witches was all over the town after an accusation of witchcraft was made in January 1692. A group of young adolescent girls met in the home of Samuel Parris, a Puritan pastor in Salem. The pastor had a nine year old daughter, Betty. Betty and her cousin Abigail were fascinated by the voodoo tales and tricks told to them by the family slave. The family slave, Tituba, was the one whom the little girls had sought after for entertainment.1 It was not long after their time spent with Tituba, when the girls began to behave strangely; seeing visions, babbling at times, and lapsing into trances. The Puritans thought that these behaviors were of witchcraft, as the work of the devil. People in Salem began believing the girls, and charged Tituba and two other village women for practicing witchcraft on them. Two men, John Hathorne and Johnathan Corwin of Massachusetts, were called to do a legal examination of the women. The Puritans followed the Old Testament law. This was how they assessed the examinations. Scripture had a statement that said witches were not able to live. The two men knew exactly what they had to do. The examination was done on these women of Salem by looking for a certain mark on the body: a wart or tit. This specific mark was said to be the place where the devil and his demons would take blood out of the witch.2 Many of the women accused were of lower status in the community.

Research shows most of the accused witches were middle-aged women, widowed, with few or no children. Also, if the woman had been involved with domestic conflicts, they were accused. The women were accused of crimes and appeared to be dangerous by their neighbors. Women in Salem who inherited or possessed land were also accused of witchcraft.3 The accusations towards these women were out of the ordinary and seemingly wrong. One must first think about the view of women during this time. They were undermined and portrayed as having no power or knowledge of such things; they were subservient to the men in the community. Not only were low class women accused of witchcraft, but as time passed, superior women were accused as well.4

On October 29th, the Salem Witch Trials were called to an end. Governor Phips dismissed the Court and that marked the end to the witch hunt craze. Many were disappointed about the ending of the trials, but many were glad to return to work.5 The community in Salem blamed Pastor Parris for letting the innocent die. The people of the Salem church also voted to void his salary. In the following years, those family members of the deceased were restored their good names. The families were awarded a compensation for all the financial loses they went through during such tragic times. Increase Mather, a pastor of the Boston Puritan Church, wanted the people to do away with the court because he believed they put innocent people to death.

The Witch trials took on an important role in American History. The trials became a tragic and memorable moment in history. Generational, racial, and sexual hostility, opposition to law, social stresses, and food poisoning were all causes as to why the people had anxieties that found release in the witch hunt craze. The witch hunts became searches for scapegoats; the community leaders were looking for anyway possible to ease the community’s anxieties.6