Clarence Norris: The Last Voice of the Scottsboro Boys 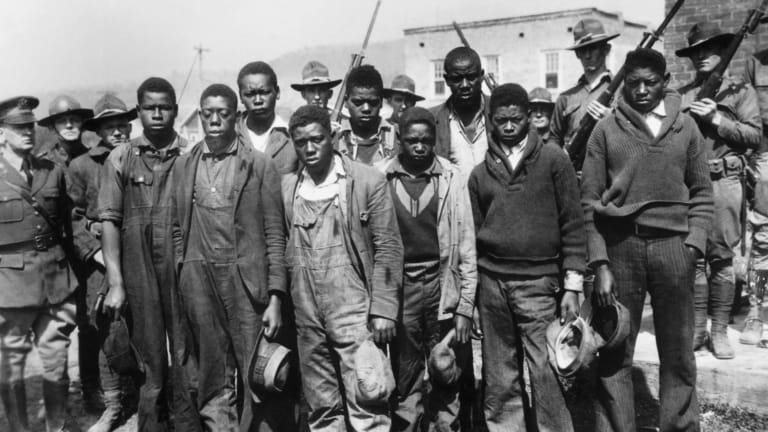 April 7, 1931. Thousands of people gathered in the small town of Scottsboro, Alabama. A brass band entertained them with the song “There’ll be a Hot Time in the Old Town Tonight.”1 The verdict of nineteen-year-old Clarence Norris was read, convicting him of a crime he did not commit, and sentencing him to death. Clarence was the son of a former slave. At the young age of seven, he was put to work in the fields and went to school minimally. After his father died, he began working for wages, and he took a trip on the Southern Railroad to look for work. However, all it took was this train ride to change his whole life. And most importantly, all it took was this specific train ride to change history. Clarence Norris, an African-American teenager, was aboard that train, moving from town to town looking for a better life and a better opportunity. But what happened on that train ended all of those hopes. What began as a fight between a group of African-American teenagers and white teenagers would land Norris and the eight other “Scottsboro Boys” in jail with a minor charge. However, when two white females who were aboard the train told a different story, not only would the teenagers’ reputations be in danger, but their lives as well.

On the morning of March 25, 1931, nine African-American male teenagers were pulled off the train by the sheriff’s posse in response to a complaint about a fight on the train. Victoria Price, twenty-one, and Ruby Bates, eighteen, were also on the train hoboing, wandering aimlessly from one place to another looking for work. When questioned by the sheriff’s posse, the young ladies changed the lives of these nine young men when they accuse them of rape. By that evening, the local newspaper, Jackson County Sentinel, spread the word of this “revolting crime.”2

1931, ordinary general and department stores, houses, and schools were found on every corner. However, there was something far more sinister waiting around the corner. Groups of white individuals would gather together to form mobs to demand a lynching.3 This was what awaited the nine boys when they arrived at Scottsboro, only to be convicted of a crime they had not committed. By March 30, 1931, five days after being arrested for a minor charge, the Scottsboro Boys were all indicted by a grand jury. Then April 7 came. Distraught and alone, Clarence Norris found himself in a jail cell with a lynch mob forming outside the jail. The National Guard was brought in, in order to protect the Scottsboro Boys. Up to 10,000 spectators gathered as they brought Norris to trial, with armed soldiers on hand to keep the growing mob at bay. Bates had testified that she was beaten and bruised by the repeated rapes and that she lost consciousness, regaining consciousness only when she found herself on the way to the Scottsboro jail. However, multiple witnesses and officers reported seeing her fully conscious when she, and the boys, were taken off the train. R.R. Bridges, the physician who examined the two girls, testified that they showed evidence of recent sexual activity, but not recent enough to match the time of the alleged rapes, and they showed no evidence of bruising or violent treatment. The verdict was read and Clarence’s fate was in the hands of an all-white jury. The defense team provided to Clarence was Tennessee attorney Stephen R. Roddy, an alcoholic, who was not familiar with Alabama law, and Milo Moody, a 69-year-old lawyer who hadn’t practiced in years. 4 Despite the contrary evidence, in less than two hours, with the testimonies of Price and Bates, and the lack of proper representation, nineteen-year-old Clarence was sentenced to death. Surrounded by strangers, charged by men and a system built against his people, Clarence Norris began his forty-five-year long hardship, not only fighting for his rights, but also for his life.

“I was scared before, but it wasn’t nothing to how I felt now. I knew if a white woman accused a black man of rape, he was as good as dead… All I could think was that I was going to die for something I had not done.” – Clarence Norris 5

Anger and dismay began to sweep the nation and around the world over the racially motivated arrests and prosecution of the boys. In May of that year, hundreds of thousands of supporters gathered to protest the convictions and demanded the freedom of the young Scottsboro Boys.6 Astonished by the age of the defendants, the length of their trials, and sentences received, the National Association for the Advancement of Colored People (NAACP) as well as the International Labor Defense (ILD) reached out and provided support for the young men and their families. The organizations even raised money for appeals. However, the NAACP withdrew from the case due to the nature of the crime. 7

The following year, the Alabama Supreme Court kept all of the Scottsboro Boys convictions and death sentences except for the second youngest, Eugene Williams. In November, however, the U.S. Supreme Court ruled in Powell v. Alabama that Alabama had denied the defendants acceptable felony illustration or due manner guaranteed by the Fourteenth Amendment.8

During this time, Clarence spent the majority of his time on death row, haunted by the executions he could hear from his cell, and dreamt of his death. Norris was only nineteen years old and was forced to hear people being put to death. He lived knowing that the death penalty was the sentence handed to him, that eventually, his turn was going to come to be in that chair, for something that he never did. Norris was retried again in 1933, only to be sentenced to death yet again. However, this time his appeal was sent to the United States Supreme Court. In the trial, the court ruled that the absence of black jurors was a violation of the Fourteenth Amendment’s equal protection clause and called for a retrial.9 While awaiting a new trial, Norris felt alone and there was no one to talk to or anyone to listen to his story. Norris was tried and convicted a third time in 1937. Norris spent fifteen years in prison. Twice his head was shaved in preparation for his execution.

“I am alone, out to myself. No one to say a Kind word to Me just listens to the other people away from me.” – Clarence Norris

However, what the world didn’t expect was for the rape charges against Olen Montgomery, Willie Roberson, Eugene Williams, and Roy Wright to be dropped.10 As these Scottsboro Boys were released, Norris suspected that the State changed the story to get the four boys free, sacrificing his chance at freedom. The next year, his death sentence was commuted to life in prison. While working in a prison mill, Norris would lose a finger, be abused by guards, and spent long periods in solitary confinement. A once young man was now raised into the prison system, facing hardships for something he never did. Clarence Norris was losing hope.

In 1944 Clarence Norris stepped outside jail for the first time since 1931 when he was paroled.11 After prison, he was made to work in a sawmill by his parole officer. However, Norris had enough and it was time to leave, and he violated the conditions of his parole by leaving Alabama. At the time, Attorney Chalmers was still attempting to negotiate for the release of Powell and Patterson; his parole violations made this task monumentally more difficult. Eventually, Chalmers persuaded Norris to return to Alabama where he was taken into custody for another two years. Once paroled again, Norris violated his conditions by fleeing to New York, vowing to remain a fugitive, never to return.

Taking up his brother’s identity Norris found work on his own or with the help of friends like his defense lawyer, Samuel Leibowitz, and the NAACP. By the 1960s, he was living with a third wife and their children in Brooklyn, New York. Still, in violation of his parole, Norris always feared the effect of his past on his children. Norris contacted the NAACP to help him arrange a pardon. The NAACP launched a public campaign in the fall of 1976, which resulted in Governor George Wallace granting Norris a full pardon, officially freeing him at last, 45 years after his initial arrest.12 Norris died in 1989 at the age of 76, after publishing an autobiography, The Last of the Scottsboro Boys; he was the last surviving member of the original nine. It took eighty-two years for the State of Alabama to posthumously pardon the other Scottsboro Boys: Powell, Andy Wright, and Patterson in 2013.

Today, everyone who was a part of the trial is gone, but still, the story of the Scottsboro Boy lives on in sons, daughters, grandsons, and neighbors. The convictions of nine innocent teenagers have haunted the nation. It’s been 88 years since the Scottsboro Boys were first convicted of rape and sentenced to death, and most of the lives of the Scottsboro Boys have been lost in the light of this American tragedy. However, the effects of their cases have left an everlasting effect on today’s world and have helped provide the strength to bring justice in a time when people have become divided once more.13

My name is Kathryn Martinez. I am a forensic science criminology major with a minor in biology, graduating in the fall of 2022.