Clothing as the Message: Female vs. Male Gaze in Women’s Fashion 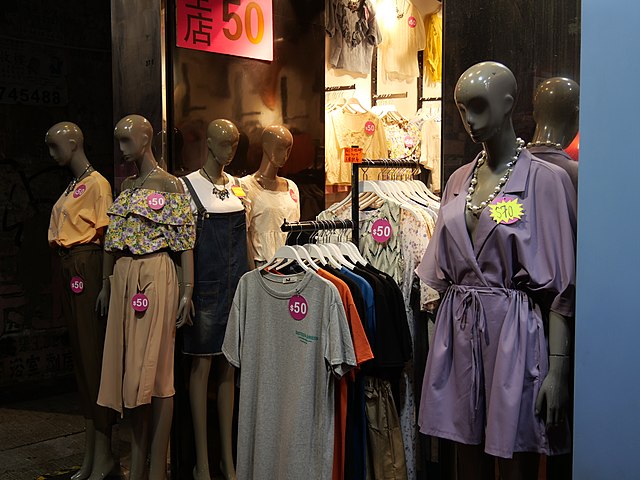 People often forget that style is more than just clothes. Clothes are a form of self-expression, creativity, and most importantly communication. Especially now in the age of social media, personal style has been more evident than ever before. There are many different aesthetics and subcultures of fashion, each with its own origins and messages: there is “no more clear boundary between high and low, mainstream and alternative culture” 1 This also corresponds with the rise of fast fashion and the popularity of secondhand clothing, thrifting specifically. Now more than ever women have access to clothing that expresses their own ideas of fashion and individuality.

However, modern-day society remains patriarchal even with all the strides that have been made for gender equality. Women in media: film, television, music, theatre, dance, etc. were and are still being viewed under what is referred to as the male gaze. 2 The male gaze is to represent women as “objects of desire, as legacy bearers, and as real estate rather than imagined sex partners” 3 This directly benefits and is a result of the patriarchy. The idea of the male gaze has also been embedded in women’s fashion hiding under femininity. While many feminists have been advocating for women to take their femininity with pride, there are ways that the male gaze turns femininity into a realm to benefit the patriarchy’s inherent need to sexualize women at all times. Men are in control in regard to the male gaze. Alicia Malone describes the male gaze as “men are almost always doing the looking, with women left in the weaker position of being looked at” saying that it “affects how each of us view women – and how women view themselves.” 4  This includes very sexualized hyperfeminine, and often uncomfortable and impractical, clothing for women. So, while women can believe they are embracing their feminine side, it could present itself as in agreement with the male gaze.

In opposition to the male gaze, a new feminist form of thought arose. The female gaze presents women as proponents of popular culture making them “both performers and fans” 5 The female gaze is women expressing themselves only for themselves. This breaks open the box that the male gaze had trapped women in. In regard to modern women’s fashion, this can express itself in unconventional femininity. This can manifest itself in many ways since it is personal in nature. The female gaze can prioritize different aspects of clothing such as comfort, function, versatility, and sustainability. the female gaze also opens up more room for women to develop their personal style, and in the age of fast fashion and micro trends, personal style is far more difficult to achieve. Fashion under the female gaze also tends to lean into a more practical clothing shift-clothes that can be worn on many different occasions and that can be layered easily with other pieces.

The most upfront example in recent years is the depiction of the character Harley Quinn in the DC Cinematic Universe. The modern Harley Quinn audiences know, played by Margot Robbie, was first introduced in the 2016 film Suicide Squad. 6In the film Quinn is dressed in a ripped t-shirt with the phrase “Daddy’s Little Monster” printed along the front of it, shorts cut in the shape of underwear, fishnet stockings, heeled tennis shoes, and topped with a blue and red bomber style jacket. Throughout the film, Quinn is expected to fight in various modes of combat, however, her outfit does not reflect the clothes of a person who is running and fighting others. While the outfit itself is very feminine, it is apparent that this version of femininity is directed towards the predominantly male audience that the film was geared towards. Especially in comparison to the male characters of the film, who gets to wear more conservative and practical attire, Quinn sticks out like a sore thumb. In opposition, Quinn’s outfit in her subsequent film Birds of Prey (and the Fantabulous Emancipation of One Harley Quinn)7, Quinn is dressed more towards the female gaze. Harley gets a series of outfit changes, all that feel more realistic to a combative fighter and woman. While the outfits are still flashy and outlandish (after all she is still a comic book character) they are geared more towards a female audience. She is still dressed in a feminine and sexual way, but the clothes express her personality far better than in the previous film. As Harley gains independence from her once abusive boyfriend in the previous film, she is able to dress for herself and her own self-expression.

Seeing Harley Quinn’s fashion evolution in media is a prime example of the shift that women’s fashion regarding the male and female gaze. While dressing towards the male gaze is not inherently awful, having the male gaze be the primary lens women are perceived in fashion only enforces the patriarchal influence on women. The female gaze is to “give women agency” on how they can be perceived by both men and women. 8 The female gaze is about expressing femininity without the sole purpose of benefitting men. It is about showing personality, uniqueness, femininity, interests, and style. Clothing is more than clothes. Clothing is a message and a reflection of the person.

The article is very well-written and I enjoyed it for what it was. It taught me a lot about clothing that I never seemed to care much attention about because I admit I do like dressing downward to feel more comfortable in my skin. I never understood the importance of the different gazes until now. I feel like your tone was appropriate for the type of article you have wrote and I appreciate it.

This was a very informative article and showed me some things that I didn’t even notice. To be honest I don’t really care what a person wears especially if they are a hero or villain. Because to me that doesn’t really matter since to me as long as they look cool then I’m fine. But you are right about the female clothing in movies and that they usually aren’t practical with very few cases. But some characters like Harley make sense since they really aren’t all there in the head.

I really enjoy how this article explains the male gaze through the eyes of fashion. The example of Harley Quinn is perfect for describing the male gaze affecting women’s fashion in the media we consume. While the outfit is feminine it is a femininity geared towards men. Womens’ fashion should instead be for women.Harley Quinn is a very popular character and impressionable to young girls. I completely agree with the statement, “this version of femininity is directed towards the predominantly male audience that the film was geared towards”, because it is completely true.

The example of Harley Quinn is one that I find incredibly useful in this scenario. Her first appearance in The Suicide Squad took place after her recent departure from her relationship, but still showed how she dressed for him, as if he symbolized the male gaze both figuratively and literally, as she found herself still dressing in outfits that he (or any male) would prefer. The change in her appearance both creates a shift between how she sees herself and how she wants the world to see her and the use of this example was an excellent way of showing how society is growing to do the same.

Hey Andrea, I like this article a lot . It’s perfect, especially for the world we live in. Sadly a lot of women are always looked at like sex symbols or a piece of meat because of what we wear, whether we wear more clothing or less, now a days it does not matter. Being a women is awesome and we do show our character/personality through clothing/fashion, however this time and day we live in encourages to wear less, and I do believe it is for the male gaze, however, many women still do choose to dress inappropriate and of course it attracts eyes but also it will give others the wrong impression about the person. So I must say, yes we as women should be able to express through dress, but also be cautious and consider how much you will be revealing so people won’t get the wrong idea, unless that is what they are aiming for, then go for it. Thanks! Great Article!

What a great article! I completely agree with what you’re explaining. Yes women are stepping out and taking back their femininity but there are still a few things that hold us down. A major one being the male gaze, as it judges us and enforces this sort of rule that women must dress this way to benefit men only and not themselves. You did a great job differentiating the Male gaze from the Female gaze. I hope women who read this can learn from this and go out there and confidently express themselves through their fashion.

This was a very good essay. I loved the topic of choice and I feel like it needs to be talked about more. Womens fashion is becoming sexualized by men as a way of us showing off too much skin or not showing enough. I enjoyed reading your artice and liked how you had many sources to back up your argument. The way we dress is way more deeper than men would ever understand. I like how you talked about that we don’t dress for the mens eyes but a way to express ourselves as women.