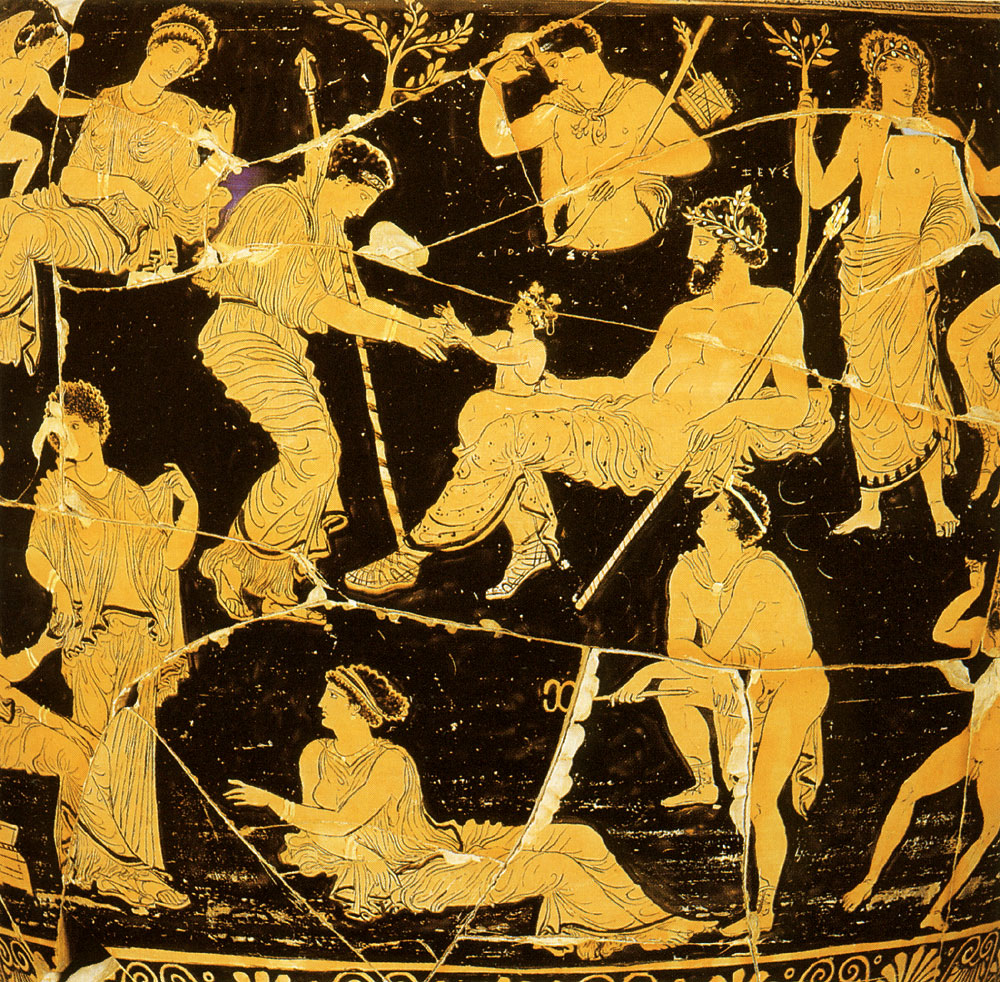 Parties with drinking, dancing, and singing are rarely thought of as cults. Cults are often thought of as small religious groups that are frowned upon and viewed with suspicion by outsiders. Today, when we hear the word cult, we imagine people wearing white robes, creepy leaders and brainwashed followers who follow their leaders into rituals of mass suicide by Kool-Aid. In ancient Greece, however, everyone wanted to be a part of the Cult of Dionysus, where everyone would gather with free food, free wine, and the Goat Song.

Dionysus is the Greek God of wine, of winemaking, and of merriment and gaiety. He was supposed to have been born by the union of a mortal woman, Semele, princess of Thebes, and the greatest of the Greek gods, Zeus. Ancient Greek mythology holds that he was twice born, because when Semele was pregnant with Dionysus, Zeus took him and kept him in his thigh until he was ready to be born. While this may sound strange, there is a good explanation. Hera, Zeus’ wife who was also a goddess, had learned that Zeus had impregnated a moral woman; she was filled with jealousy and rage. The vengeful Hera disguised herself as a mortal woman and visited Semele. Once with her, she convinced Semele to ask Zeus to grant her one wish. When Semele asked for her one wish, Zeus promised to grant her anything. Semele asked Zeus to present himself in his true form, as a god not as a man, as suggested by Hera. Zeus kept his promise, but he knew that if Semele ever gazed upon him, she would die. So when he revealed himself to Semele in his true form, Zeus had Hermes take Dionysus from her womb and placed him into Zeus’ thigh so that he would not also die with Semele.1

As the god of wine, Dionysus is supposed to spread the knowledge of how to grow grape vines. In ancient Greece, wine was one of the few goods they could produce. Because of this, Dionysus was a major deity, and it was said that he was one of the twelve gods that lived upon Mount Olympus. Temples were erected in his honor and worship of him spread throughout the Greek poleis. Annual festivals called Dionysia were held in his honor and, of course, the purpose was to relax, feast, dance, and drink wine.2

Some dances in honor of Dionysus were performed on oiled wineskins, which were bags made out of animal skins that were filled with wine. Dionysus loved goats, donkeys, and tigers. Not only were those animals at the Dionysia, but their skins were also danced upon. When someone fell off the oiled wineskins, everyone cheered, laughed, and drank wine.

The Greeks held competitions to see who might be the manliest man and who could drink a pitcher of wine the fastest. The winner would receive a smaller oiled wineskin as a trophy, which was essentially another container of wine.3

At the annual Dionysia, the Goat Song was also preformed. The Goat Song gave birth to Greek drama. Originally, a song or hymn was sung as a goat was being sacrificed to Dionysus. The song often addressed questions that were arising about divine law, judgement, and various social conflicts of general concern. The Goat Song was seen as something of a group discussion or address of common concerns, and as a way for people collectively and individually to purify their minds. The hymn then became a performance piece, sung by a chorus. The performance evolved over time to include first a monologue, and then with the addition of a second voice, a dialogue. Eventually, more voices were added, and the performance of the Goat Song became the tragic drama we have come to associate with the great Greek tragedians Aeschylus, Sophocles, and Euripides. In fact, the Greek word tragedia, from which we get our word tragedy, literally translates as “the song of a male goat.” The Greeks truly loved drama because they felt that the gods were speaking to them and judging their piety, rather than merely being annoyed by them.4

The cult of Dionysus does not seem so suspicious now. There were not any outrageous daily rituals or strange articles of clothing they had to wear. The cult of Dionysus consisted of dancing, drinking, singing, and feasting, every college student’s four favorite things.

Cults of the modern day are rightfully shunned by society because they exclude their members from family, coworkers, friends and violate several human rights in the process. Conversely, the cults within the ancient human societies had a different purpose than isolation and exploitation, that being the cultivation of a religion in cultural works. The article does a good job presenting what these religious, Hellenistic practices entailed.

The cult of Dionysus is quite interesting. Usually, when people hear the word “cult,” people imagine a charismatic leader teaching a group of brainwashed people a new doctrine. However, the cult of Dionysus is about partying and drinking a lot of wine, which is why many Greeks wanted to be part of this cult. This was an interesting article to read.

Jealousy can really kill. It made me a bit down that Hera convinced Semele to basically kill herself. Now Semele will never be able to watch her son grow. It was funny to read that this “cult” was just a bunch of parting and drinking. From the title I would have never have guessed. I really liked this article great job!

The title is really that brought me here, and yes the author was right, I was expecting some evil ritual to be happening and some people dressed in robes. nonetheless it was still interesting to see how Dionysus was born or brought into the world of the olympians. I had always heard of Dionysus but never really understood what his real power was and how he came about. I find it funny how the story can kind of relate to the real world, the cult really did just drink alcohol and eat food while music and performance is going on. It really does sound like a typical party.

It is funny to read about history, because whenever I look back at history I forget that people have always been people. People really like to party, and I found it interesting how people dedicated an entire cult to basically relaxing and having fun. It is funny to admit that I was drawn towards the article with the word “cult” (immediately thinking of brainwashing, rituals, dark robes, etc), but the cult turned out to be the complete opposite. This article on a cult was not at all what I was expecting originally, it had a light-hearted tone and I really enjoyed it.

When I first saw the title of the article, I thought that the ancient Greeks were holding a sacrificial ceremony in the honor of Dionysus, the God of Wine. However the cult turned out to be great gathering with free food and wine. The way that Dionysus was born was very interesting. Greek mythology never cease to amuse me with the weirdest plot twist and endings. I bet the cult of Dionysus must be full of fun and laughter with the company of free food, wine and goat song.

Pogue does a great job highlighting the variation between modern day’s idea of a cult being sinister and brainwashed and the cult that worshipped Dionysus. Due to her substantiating her claim with evidence of activities that they would do in honor of their god, I agree with her and now perceive this cult to be more like a stereotypical fraternity than an ominous clique.

As the author pointed out, cults are often viewed negatively due to the perceptions of rituals, sacrifices, and death surrounding them. However, the author presents the cult of Dionysus and offers a completely different perspective on cults because of this one cult. The Cult of Dionysus focused more on enjoying the presence of other people, drinking wine, and singing along with a song now termed as the Goat Song. Because of this article, people might be more open when it comes to the idea of cults.

Nice article! Before reading it, I was expecting to read about a creepy group of people who would hold sacrificial ceremonies to honor Dionysus. However, while reading, I learned that cult just ended up being a group of people who gathered to enjoy free food and wine. I enjoyed reading this article as it was about a topic I didn’t know much about. Good job!

This article really has a title that makes you want to click it. I was expecting the cult to be like the ones we hear about now. However, not only does it seem to be tame it also makes sense when compared to the time period and culture of the Greeks. It seems like those in the “cult” gathered to show appreciation to the god and worship. This is surprising considering that Dionysius isn’t a god that is known for power or good fortune. However, if grapes and wine are the cash crops of the time the worship does make sense in order to have a plentiful harvest.