“Gatling Gun Parker” and the Battle of San Juan Hill 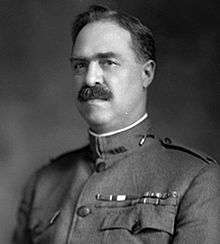 General John Henry Parker is best known for his role as the commander of the Gatling Gun detachment during the Spanish-American War. In early 1898, then Lieutenant Parker, a recent graduate of the United States Military Academy, was placed in charge of training soldiers in the use of machine guns. His detachment was a dumping ground for soldiers not fit to serve in other areas, and at that time, the idea of using machine guns in battle was of little value to the US Army.  However, Parker believed machine guns could play a vital role in battle.1

In this time period, large artillery had to be transported by draft animals. This was not always a feasible possibility given the terrain, the time frame, and the fact that animals could be killed by enemy fire. Lt. Parker was able to see the purpose of machine guns as a replacement for artillery in battle, especially at ranges closer than 1500 yards.2  He petitioned the US Army for a chance to build a machine gun detachment that could be used for offensive battle tactics, and was granted permission to put a unit together shortly before being sent to Cuba during the Spanish-American War.

Lt. Parker was given four brand new 1895 Gatling guns of .30 caliber. The Gatling gun works by gravity feeding bullets into the top and dropping shells out the bottom, while the shaft was turned by a hand-crank. The gun’s swivel mount and rapid fire allowed the shooter to aim and shoot over long distances of up to 2000 yards, protecting the shooter from enemy fire by artillery. The only disadvantage of the Gatling gun, aside from a lack of training on the weapon, was that it was prone to jamming.3

At the start of the Spanish-American War, Lt. Parker and his Gatling Gun Detachment were assigned to the 5th Army Corps. It would be the first time the US Army would use machine guns as an offensive weapon during battle. On July 1, 1898, the Battle of San Juan Hill began early in the morning. Theodore Roosevelt’s Rough Riders and the Buffalo Soldiers of the 10th Calvary and the 24th Infantry Regiments were attempting to take San Juan Hill and Kettle Hill. The US Army was off to an early loss on that first day of the battle. It was not until the afternoon, when Lt. Parker positioned his Gatling guns and opened fire, that the battle went in favor of the US Army.4  The US artillery used black powder and the Spanish Army used smokeless powder, allowing the Spanish Army to see and fire upon the US artillery. The Gatling guns, however, were smokeless.5

Although the US lost three times the number of soldiers as the Spanish, supporting fire from the Gatling guns was crucial to the success of the Battle of San Juan.  The artillery were only able to shoot about 270 fragments, while the Gatling guns were able to shoot with precision about 1000 shots.8  For the first time in history, machine guns were used offensively in a battle and were able to successfully disable an opposing army’s artillery. Spanish Army General Jose Toral said in his official report that the Gatling guns and their fire power was a major reason for the Spanish surrender.9

Lt. Parker was awarded the Silver Star for gallantry in action and was eventually promoted to general. He continued his military career by training other armies in Europe in the use of machine guns in warfare. Prior to the Spanish-American War, Parker believed that using machine guns in close battle would allow troops to advance under the protection of the machine guns, harming the enemy and improving the morale of US soldiers. This value of the machine gun had been proven.10