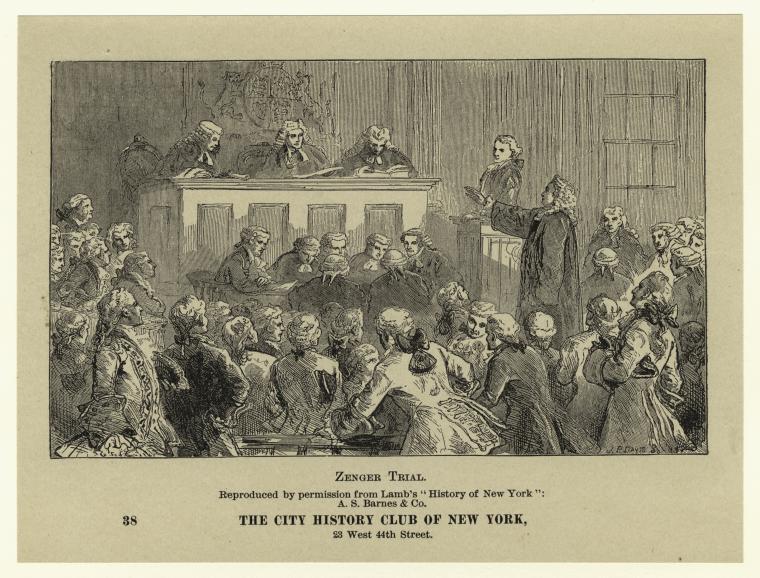 In the media today, every public figure is being scrutinized through a magnifying glass. People are openly, and at times brutally, expressing their opinions about celebrities, athletes, and especially politicians. Now imagine if every reporter, journalist, or even just an ordinary citizen was arrested for publishing either images or written words that were deemed harmful to the reputation of a public figure. Today we have legal guarantees permitting us the freedom to speak freely about our opinions; it is called the first amendment to the Constitution, giving us the freedom of speech, press, religion, assembly, and petition. During the eighteenth century, however, this liberty was not yet established. Instead, this act was called libel, when an individual published untruthful or harmful opinions about government officials. John Peter Zenger spoke truth to power, and thereby he fought for the right of expression through written formation, particularly when the opinions and concerns of writers have a truthful undertone.

John Peter Zenger was born in 1697 in Impflingen, in the Palatinate land in Germany. In 1710, at the age of thirteen, John and his family immigrated to English America. They began their new lives in New York. When John turned fourteen, he began an apprenticeship with William Bradford, a royal printer in the New York colony. In 1719, upon the completion of his apprenticeship, Zenger moved to Maryland for a few years only to return to New York in 1725. The same year of his return to New York, Zenger became partners with his former mentor. The following year, John was able to establish his own printing business. His establishment was prospering by 1730. John’s company printed the first arithmetic textbook to be published throughout the colonies. Continuing his success, Zenger developed a newspaper in 1733 called the New York Weekly Journal.1

While Zenger was building and flourishing a successful business, New York was experiencing some political confrontations. The king of England had recently appointed William Cosby to be the new governor of New York. Cosby was a vicious leader who constantly abused his position for personal gain. He cared more about wealth than prospering the colony. Cosby sued the former acting governor, Rip Van Dam, for refusing to give him half of his salary, which he obtained while he was in office. When the case was sent to the provincial Supreme Court, chief justice Lewis Morris ruled against Cosby. In a spiteful act of retaliation, Cosby then went on to fire Morris. Afterwards, Morris and many other anti-Cosby supporters desperately wanted to reveal Cosby’s true nature to the colony. He was able to form allies with attorneys James Alexander, William Smith, Sr., and other influential political figures within New York, to establish a strong foundation of protesters to rally against Cosby and the following he was able to obtain within the administration. In order to obtain a stronger following and reach the general public, Morris and his fellow anti-Cosby supporters came up with the idea to reach the members of the colony through the printed press. However, no one would dare publish anything without the approval of local executives in fear of being accused of seditious libel.2 This is how Zenger became injected into the situation. Morris, along with the influence of his supporters, convinced Zenger to use his newspaper in an ongoing attempt to expose Cosby’s true character. Zenger willingly joined the cause. He allowed Morris and his following to write anonymous articles regarding Cosby and the need for liberty. James Alexander was responsible for editing all of the articles, and then Zenger would publish them into his newspaper. Zenger’s first issue of his newspaper was published on November 5, 1733.3  The articles from the paper aggressively attacked Cosby for his actions regarding the Van Dam incident. They scorned his political decisions, questioned all of his judgments, claiming them to be rash and irresponsible, and overall denounced his character. Despite the main focus of the paper focusing on removing Cosby as their governor, they also promoted the rights and liberties of what they believed belonged to a “true Englishmen.”4

The introduction exactly expresses how the media is used nowadays and the power they possess. The different sources of spreading news has always been a major influence on the public and their opinions and thoughts. It was really interesting to see the power the newspaper had for the people to get their voices heard for retaliating against Cosby.

Talk about the history of social media! It is crazy to think that once people were afraid to put their thoughts out in the world and today it comes so easy to everyone. Zenger was truly a brave man to put out newspapers of this sort 60 years before the First Amendment! Great article! I’m excited to read part II.

Your introduction really represents the way we use media today. I couldn’t visualize how many journalists and reporters would be behind bars if they spoke their true thoughts. I think John Zenger did the right thing in giving others the right to say what they truly think. It’s distressed that the first amendment hadn’t been established yet. Now I can’t wait to read the second part.

Very interesting article! As mentioned, your first paragraph really grasps the idea of how the media is used today and the various of ways it can influence the public. It’s crazy to think about how at that time you didn’t have the First Amendment and were limited to everything you said. Zenger truly became an inspiration considering he was brave enough to share his own ideas and opinion before the First Amendment. Overall, great article!!

This article was well written! I really enjoyed how you were able to grasp the attention of the reader(myself) so easily within the first paragraph alone. It’s interesting how at one point in time people were scared to voice their opinions, and now it almost comes naturally. I can’t imagine how life would be without the assurance of the 1st amendment. I can’t wait to read part two!

Thank you for this article! I find the topic extremely interesting, and I think that we tend to forget easily about the chance that we have to live in a country where we have the freedom of speech and the freedom of the press. Moreover, John Peter Zenger’s story is a good example that we have to fight for our rights if we want them to be respected.

I loved reading this article, it was clear, concise, and overall a wonder to read. I personally feel like living in a country where we already are accustomed to having such an important right, we tend to forget we have it and just take it for granted or only talk about it when we feel ur opinions are being attacked. I feel like John Peter Zenger is a great example and highlights the importance perfectly.

A very well written article!!! I have always wondered what the people would do before there was the First Amendment. I believe the people do deserve to see the truth about everything and everyone. I admire how they expressed their feelings and spoke out to reveal what they thought was wrong. I wonder where our media would be now if we did not have the First Amendment.