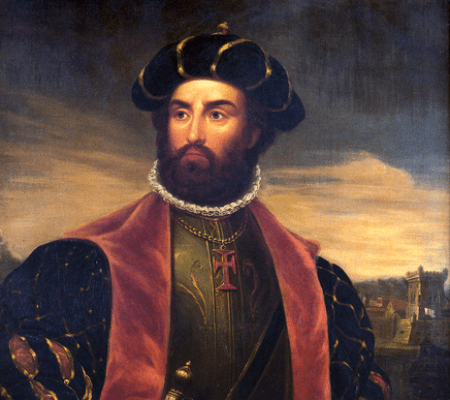 Vasco da Gama, the first European to sail around the continent of Africa to Asia, was born into a noble Portuguese family around 1460 in Sines, Portugal. He was the third son of Esevao da Gama, also a navigator, that was the commander of the fortress of Sines on the coast of Alentejo. He joined the Portugal navy as soon as he was old enough to join. Under the direction of King John II, da Gama was appointed commander of a ship with the intention of finding a sailing route to India. In 1492, King John II sent da Gama to a port south of Lisbon, known as Setubal, and to Algarve to seize French ships in retaliation to the French destroying Portugal shipping.1

In 1487, on a voyage funded by Portugal, Bartholomeu Dias found that the Indian and Atlantic Oceans were linked and discovered a passage around the Cape of Good Hope. When King Manuel rose to power in 1495, he decided to revisit the possibility that Dias’s new route opened the potential to sending a Portuguese fleet to Asia around Africa. He wanted to open a route for Portugal to make money trading spice and thereby establish Portugal as a major maritime and colonial power. A few years later, in 1497, da Gama was appointed to command a ship by King Manuel. Although da Gama was an inexperienced explorer, he was appointed to lead the expedition to discover a sailing route to India.2

For the expedition, da Gama turned to Dias to help him plan and organize the trip. His fleet consisted of two new ships that were built specifically for the expedition and two refurbished ships that were equipped with better cannons than the new ones. He recruited a crew of 170 men that included some of Portugal’s most experienced navigators. Along with the experienced navigators, he looked for men that were tough enough to withstand the harsh conditions of life at sea. Many of the crew that he recruited were convicts whose lives, he believed, were expendable.3

On July 8, 1497, da Gama set sail from Lisbon to Asia. He was accompanied by Dias who served as pilot to the Canary Islands. The fleet reached the Canary Islands on July 15 and proceeded on to the Cape Verde Islands. After spending the next days at Cape Verde resting and preparing for the next stage of their trip, the crew set sail again on August 3; Da Gama and his crew would not see land for the next three months. On November 22, he led his crew around the Cape of Good Hope, and on Christmas Day, arrived at what is known today as Natal. The expedition made several stops along the eastern coast of Africa to trade the goods in their possession for fruits and vegetables. On March 2, 1497, Da Gama and his crew arrived at what is known as Mozambique; they stationed themselves there for several months to allow the crew time to recover from the scurvy they had contracted and to repair their vessels. With the help of a local Muslin pilot, he then departed across the Indian Ocean and reached Calicut on May 20.4 Although the King of Calicut was staying at Ponnani, he returned to Calicut upon hearing of the foreigners’ arrival. Da Gama was initially received with the usual hospitality, and he traded goods with their host, but sadly their goods were not appreciated. The goods that da Gama and his crew brought did not sell. In addition to their goods not selling well, the Muslin merchants, with whom da Gama had conflicts and who dominated the city’s trade, convinced the zamorin that they would gain nothing by entering into a trade agreement with the intruders.5

Despite not having secured a trade agreement, he was able to secure a large shipment of spices before leaving. On his return voyage back to Portugal, da Gama encountered extensive hardship. The return voyage claimed the life of his brother Paulo, who had captained one of the ships, as well as the lives of many of his crew. On his arrival back to Lisbon, on September 9, 1499, da Gama received wealth and titles.6

On February 12, 1502, da Gama set sail again; he traveled to India with twenty warships with the intention of implementing Portuguese interests. His second voyage was that of a military expedition that was commissioned by the King of Portugal to demonstrate Portuguese power. On his second voyage, he encountered conflicts with Arab merchants. He assaulted and demanded praise from the Arab-controlled port of Kilwa. He also used threats and violence against the local rulers to force them to submit to the Portuguese authority. On his return to Portugal, he was made Count of Vidigueira, and was awarded feudal rights and jurisdiction over Vidigueria and Vila dos Frades. Having the recognition as someone who could “fix” problems that arose in India, he embarked on his third and final voyage in 1524. Portugal now had forts and settlements in India, and da Gama was sent to replace the inadequate Eduardo de Menezes as viceroy of the Portuguese properties. However, soon after arriving da Gama contracted malaria and died.

Da Gama’s expeditions were extremely valuable to the Portuguese. His voyages opened maritime trade between Asia and Europe. Prior to Vasco da Gama’s voyages, Portugal was comparatively a poor resource country.  It relied on trade to help it become a strong country. Da Gama’s voyages also impacted the Portuguese economy by bringing back spices to Portugal, opening the spice trade to Portuguese merchants. The spice trade was very lucrative and helped make Portugal one of the most important trade and naval powers in the Indian Ocean. Finally, the voyages opened a direct route from Asia to Portugal, which had a huge impact considering that travel prior to the voyages was very dangerous.

Great article with lots of information. I had never heard of Vasco da Gama until reading this article and I found it interesting. I believe it must have taken a lot of courage to be an early explorer and travel to so-called unknown places. It seems that da Gama was someone that really liked to sail and enjoyed the trip since he went on several voyages. It bothers me that one of his voyages was a military trip to control the people of India that did not want the Portuguese in their homeland or to submit to a foreign ruler.

I really liked that this article contained a lot of historical context and information. Although Gama was an inexperienced sailor, he had some very interesting explorations and events. Although he lost his brother, he managed to gain wealth and titles. He was even able to gain power, enough to demand praise. It all ended when he died, but the remaining legacy was felt by the economy of Portugal.

I was not that familiar with Vasco De Gama, so this article did a great job of telling me about who he was. I also unaware of the impact of his voyage and that of the Portuguese, through their sailing efforts. It seems that De Gama was born to sail the ocean, and this article proves it. The article does a great job of telling who De Gama was and still making the story interesting enough to read.

Nice article. The Portuguese were very important in the early age of colonialism. Vasco De Gama was a great explored helped establish Portuguese control over some of the Indian subcontinent. He also had an impact on the rest of the European powers as well, given that what he learned must have also spread to other countries. Unfortunately, for Portugal it lacked the resources necessary to maintain its empire it was simply outdone by Spain

Great article. I have never heard of Vasco da Gama. I find it interesting how he helped, and how valuable he was to the Portuguese. His skills allowed him to bring trade to Portugal and boost their economy. Because of trade, he was able to bring spices to Portugal and open trade with Asia. Overall, this was a very well written and informative article, and I was able to learn a lot from it.

Gama was an essential part in establishing trade relations with other nations. Especially at a time when Portugal was low on resources, his voyages proved to help the Portugal economy flourish. I also did not know he was the first to sail around Africa to Asia. This is quite impressive given the time at which he lived. I wonder if he contracted malaria from African mosquitoes.

Nice article. Vasco De Gama was an extremely important early explorer. I always find it fascinating that Portugal was the first country to really branch out and sail the seas looking for new passage ways to the far east. Their position on the coast of the Atlantic no doubt helped them considerably during the early days of colonialism. De Gama’s expedition was also quite important in establishing relations and trade with African princes.

It was great to learn more about one of the greatest explorers, Vasco De Gama. I only knew a small amount about him from history classes that I took in high school and middle school. It was interesting to learn about his origin and how he took up the task of exploring unknown sea passages. It was great to hear about his impact on the Portuguese and his multiple voyages. I thought that the author did a great job in keeping the timeline in order and in keeping the article interesting.

I learned about this explorer in high school, but this article went more in-depth about the explorer’s life and encounters. I did not know that he came from a family of explorers and that this privilege is why he was chosen to lead an expedition, despite his inexperience. It is interesting and hints at a certain ambition that Vasco de Gama chose men he deemed expendable while also bringing his brother in his travels. I find it sad that when he finally made it to his intended destination, he died from malaria. This article was well written and informative, not only of the explorer’s life but the motivations behind the exploration as well.