The Greek Games: The Start Up of the Olympic Games 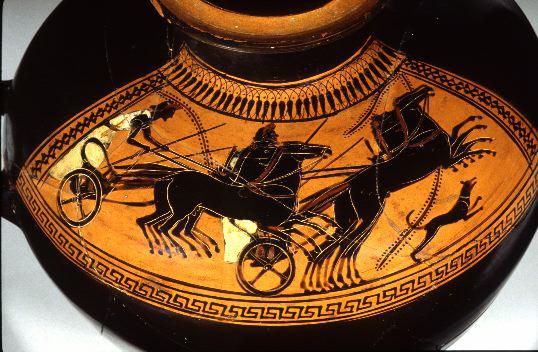 The Olympic Games weren’t always as majestic as they are today. In our modern times, every four years the eager anticipation of once again witnessing the talent of nationally recognized athletes competing overshadows any other occurring events; that’s exactly how it was in ancient Greece. However, the purpose for the games has shifted over time. The first Olympic games made its mark in history in 776 B.C.E. Competition within ancient Greece was intended to demonstrate power and wealth to the Greek world. The human body was treasured for its physical capacity. As a result, competitive games often tested the endurance of the body. Festivals honoring the Greek gods were also a popular setting for hosting competitions. Although they were not yet named Olympic games, these competitions attracted crowds interested in moments of exhilaration in their otherwise ordinary lives. At that time, the games were a uniting hallmark of Greek culture and religion, a recognition of athleticism, as well as an indicator of Greek wealth and prowess that contributed to Greek self-identity.1

Religious festivals were celebrations honoring the Greeks’ gods and goddesses. The Greeks praised the gods; a way of doing so was by partaking in the funeral games, such as the one that Homer tells us about in his epic poem Iliad, where the hero Achilles holds such games in honor of his dead friend Patroclus.2 Today we attend funerals that are full of sorrow and sympathy, but the services the Greeks would host were filled with enjoyment and competition. They saw this as a way to honor and worship the gods, by acting in competitive games. Many of the athletic events eventually evolved into the Olympics. Chariot races of dashing horses, wrestling and boxing matches that were barbarous, foot races, discus throwing, archery, and spear throwing were the activities everyone put their time into at this festival.3

The Greeks believed that Zeus would favor some athletes and deny victory to others, so the athletes who were not denied saw this as empowering. The Greeks loved to be seen as worthy by the gods, so when Zeus would favor certain athletes, those competitors became evermore interested in the outcome of the games. The Nemean Games honoring Zeus was a huge festival the Greeks attended. One of the myths describing the origins of these games claims that they began as funeral games for prince Opheltes, who died as a baby in Nemea. During this festival, athletic and equestrian events were held. The Greek gods contributed to the start of the games. They were divinities that the people looked up to in a literal sense, since their home was thought to be at the top of Mount Olympus, “home of the gods and goddesses.” However, who was allowed into the games? Well, it turns out that if one weren’t Greek or if one spoke a different language, one was forbidden from entering or participating. Only free men were initially allowed to participate in games. Women were prohibited from engaging in or watching the games because the games tended to get severely brutal, and such brutality would scar the eyes of the women.4

In Homer’s portrayal of the funeral games for Patroclus, the hero Diomedes was the first to win the chariot race. He was rewarded with a slave woman and a cauldron. Prizes in the Olympics weren’t always like the ones Diomedes received, but they were ones that would make a Greek famous and rich.5 The winning athletes were presented with a wreath of olive leaves. Also, the city-state or polis for which they were representing gave the competitor a monetary award.6 But for equestrian events, the rider was never given the prize; it was given to the owner of the horse. The games in the Olympics were not quite the same ones we have today. The games in ancient Greece evolved into more challenging events. For example, the chariot races then had competitors racing while wearing armor; today, we no longer have this game. A popular competitive event today is volleyball, but it did not exist in the ancient Greek events. This is an example as to the changes that have been made over time.

Preparation for their exercises during training was a big deal to the instructors and to the athletes. The Anointer played a role in their training. He was the one who would smear oil on the athletes’ bodies in a certain circular technique; he kept the athletes’ bodies relaxed by doing this. Greeks would have to train for at least ten months before they would partake in their specific duels.7 One of the famous wrestlers, Milo, is an example as to how the athletes would train. Milo carried a calf over his shoulder every day, so the heavier the calf, the faster and stronger his body became. His training led him to win thirty-two wrestling competitions; to show that he was capable of doing this he had carried an ox on his shoulders through the Olympia stadium.8

One of the most important outcomes from the start of the Greek Olympic games was that every time they hosted them, all conflicts were put on hold between all Greek poleis or city-states. The competitions were a chance for the Greeks from different poleis to intermingle. The leaders from the different poleis went to support their athletes, but also to negotiate political disputes with the other leaders. This was called the Olympic truce, meaning that there was an agreement on making sure that there would be no warfare occurring during the games. This truce was made to maintain the focus on the games. The Greek religion was mainly about worshiping the mythological gods and goddesses, so the Olympics became a practice for the people in honoring their gods. Those who participated in the games were held at a high standard because they were representing their polis.  In ancient Greece, the games gave the city-states the opportunity to come together and work out their conflicts face-to-face without warfare. In the modern era, we too strive for the same thing, for the Olympics to be a bridge between peoples and a place where political differences are set aside. But there have been many situations in the past that causes it to be troubling in this era.

It is very interesting to see the difference of a common point of view from someone in that time period, compared to one of present day. Then, the Olympics were a way to honor the gods and if a women or any man who did not speak Greek was present, they were kicked out. Today, the Olympics is a way for the whole world to come together and intervene in (most of the time) friendly and healthy competition. Interesting article and eye opening in explaining the origins of this great tournament.

This was a very interesting article. I found it very informative and I was excited to learn about the origin of the Olympic Games. I enjoyed how you talked about the major differences in the motivations and activities within the first Olympic type games. It was interesting to hear about the involvement of the belief in the gods. I was glad to see that you related the first Olympic Games to stories within The Iliad. I learned more about the Greek lifestyle in this time period and the traditions that have their origin in this ancient civilization.

There was no Olympic Games this year, but we can still wait for it since it is every four years. I learned that this was dated way before our modern 21st century time. Imagine competing in a game for wealth and power into the city. Pretty crazy. This attracted a lot of people in Greece and contributed to creating a self identity. Of course I knew that they were praising the Gods and Goddesses, but they did the games to show honor and worship.

I have always been fascinated with Greeks and ever since I could remember, I have been watching the Olympics. It truly is fascinating to see that it was even more challenging than it is right now, because it wasn’t just to see who had the best performance but mostly who could endure the most pain and ultimately be the last man standing because men would die. It’s also crazy to think how far we have advanced and changed the actual Olympics due to the fact that women couldn’t even see the acts in those times and now women are competing in the Olympics themselves.

I have always been obsessed with the Greeks and the mythology under their name. I too have always been intrigued by the Olympics and find it beyond interesting how each event in the olympics was in respect to a God. Its crazy how much power and attention the Olympics has gained throughout the years. What was once for the kings and wealthy now includes everyone!

I learned recently learned in class that the Olympic games originated as funeral traditions. It’s fascinating how entertainment could derive from such a somber environment. It’s very good the article points out exactly that. It’s also fascinating how the Olympics relied heavily on the faith of the gods. Winning was a sign of the god’s favor, and even playing at all was for the amusement of the gods.

I have always loved Greek history and everything about them. I believe that these people were so very advanced with the way they think and how wise they were. Many things that they established now hold up to today’s standards. One such thing being the Olympic games. The games back were completely different to the ones that we have now, but the overall standard of the game of people competing to see who was the best still stands.

This was a very interesting article about the Olympic games. I never knew how violent the games used to be and that it was part of ancient Greek funerals. It is astonishing to me that the only people who could watch the games were Greek free men. They believed the violence in the games would scar a women’s eyes if they watched. Now the Olympic games brings all countries in the world together to compete in sporting events for their countries. It amazing to see how the Olympic games have changed over generations.

It was interesting to read about the Olympics and how they started up. To start off with, the Olympics were part of the ancient Greek’s funeral. Also, another thing I didn’t know was that women were not allowed to watch the games due to the games being very violent. It’s interesting because now the Olympics are not brutal and in a way were downgraded in every aspect. I think that the Olympic games sum up the traditions and cultural aspects of the Greeks.

This was an interesting article, Clarissa. Reading about the history of the Olympics and how they began was a lot of fun because of your article. You made sure to put in as many details as possible which is great and really helps make your article stand out. Your images are extremely high quality and really help with your article as well. Your writing in general was just really well done, great job.